The current state of toy chaos in my house is a crime against cleanliness, against organization, and quite possibly against humanity.

I wonder if the earth would continue spinning on its axis if I just threw this bucket of small random toys in the garbage.  (Do you have a bucket like this in your house?  Please tell me I’m not the only Mama who has a bucket like this.)

Underneath this mess is an Ikea storage unit that is meant to prevent this kind of wrongdoing.

Stuffed animals are the worst offenders.

This unfortunate situation begs not for a trip to The Container Store, but one to the city dump.  (Well, maybe a trip to The Container Store and to the city dump.)  The predicament is similar to Motherhood is Messy in that something needs to be done, but it’s different in that the crackdown will require a stealth and swift action from 0900-1400 hours.  In other words, I must take action when the children are elsewhere.

Yesterday afternoon, as I took a few minutes to walk from room to room to survey the damage and take stock of the abyss my house has become, and I noticed how creepy all of the toys looked scattered randomly (strategically if you were to ask Dylan) throughout the house.  It occurred to me that the situation in my house isn’t a Toy Story thing.  I’m pretty sure when we leave the room or go to sleep, they’re all still dead.  It’s more of a C.S.I.: Crime Scene Investigation thing.  Not only does my house look like it’s been ransacked, but also the toys look like miniature crime scenes themselves.  Given the circumstances, I did what any insane Mama and C.S.I. wannabe would do, I documented the crimes.

A weapon left at the scene? 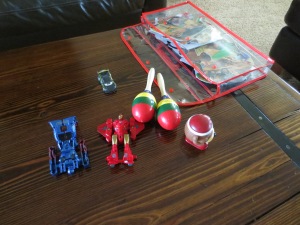 What were the maracas doing with the super hero transformer bot things?

And what does he know about it?  A material witness!

An abandoned vehicle.  Impound it! 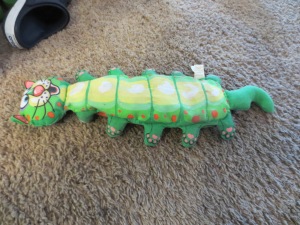 Poor kitty.  Looks like he was scared to death. 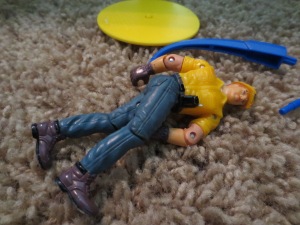 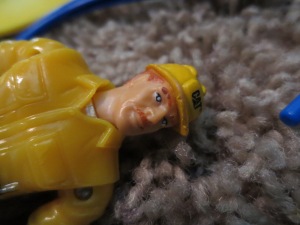 Family notifications are the hardest. 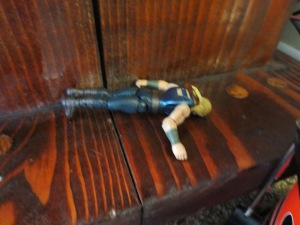 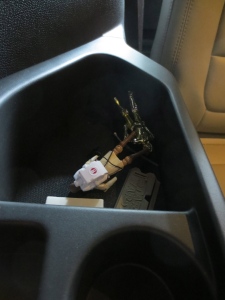 And two more in the back of the car.

It’s sad when crime comes to quiet, suburban neighborhoods.  If you need me, I’ll be collecting and analyzing evidence for the rest of the day.