Spring break is over! Yay!

Dylan is back at school, but Riley, because of the Passover holiday, doesn’t go back until tomorrow. Bugger.

Just as I anticipated, it was a long week, and just as I predicted, I wanted to pull my hair out by bedtime on Thursday. All in all, though, it was an interesting week filled with dilemmas, adventures, anxiety (of course), firsts, and family.

Dylan bought new sneakers with laces. The “with laces” part is important. I vowed never to buy him (or Riley) sneakers with laces until he could tie his own shoes, but then he drooled over these really cool black Nike basketball sneakers and I couldn’t say no. (Never say never.) Now I’m desperate to teach him to tie his own shoes (so I don’t have to do it ten times a day), and let’s just say progress has been slow. This milestone – tying ones own shoes – feels like a big deal, and I feel as much pressure to get it done as I did when Dylan was almost three and a half and not yet potty trained. I can’t help but think about Lisa Belkin’s recent piece, “Parenting Memories: The Bubbles That Unite And Divide Us,” about how we get caught up in whatever stage of parenting we’re in (breastfeeding, potty training, applying for colleges, etc.) and then find it hard to relate to parents who are in a different place. My friends, I am in the “learning to tie shoes” bubble. (Help!)

We went to the zoo and the lion roared! It. Was. Amazing. It was the first time I ever heard a lion roar, and it’s going on my Runaway Mama Bucket List, for sure. It was a first for Dylan and Riley, too, although if you ask Dylan what his favorite part of the zoo was, he’ll say, “eating popcorn.” 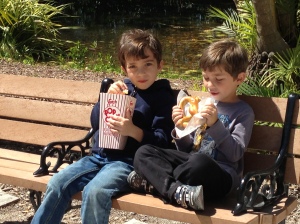 I got the results of my thyroid biopsy. Don’t get too excited. There was no result. Really. It was non-diagnostic, which means the cell sample wasn’t large enough for the pathologist to make a determination. It’s neither good nor bad. It’s nothing. It’s like it never happened. I have to do the biopsy all over again, and I have to wait three weeks to do it so the thyroid can heal completely from the first procedure. This non-diagnostic result happens approximately 10% of the time, which made me want to scream into a pillow for a little while. I’m okay now, but the anxiety has propelled my spring cleaning energy to a dangerous level. I still haven’t started on my closet, but the laundry room looks great, I rearranged the kitchen, and we finally hung some framed pictures of the boys that I’ve been meaning to do since Christmas (and before they graduate high school). Next up: the patio, the toy closet, and the boys’ bedroom. [Insert dramatic music].

We had a very successful family dinner on Saturday night at the Macaroni Grill. Both kids behaved, ate the food they ordered, and only went to the bathroom once. So that’s what it’s like to go out to dinner with my children and not have an uncontrollable urge to hurl myself out a window!

We celebrated Easter on Sunday. I (a Jewish Mama, remember) hid candy and Squinkie filled eggs in the backyard, the boys ate excessive amounts of chocolate…

…and we had a lovely brunch with stimulating conversation about Plato and Socrates’ Allegory of the Cave, “The Croods” (major philosophical undertones!), and Jesus Christ, all of which made me wonder where the hell the Easter Bunny came from.

Last but not least, bedtime last night, after a week of staying up late and sleeping in, was, predictably, a bitch.

How was your spring break?

2 responses to “Spring Break In Review”