We arrived fashionably late to the Rainbow Loom party. I don’t why. Or maybe I do.

When I saw that all of a sudden everyone wanted one, when I began to notice Mamas buying it in bulk, when the looms were banned from school, and when I began receiving emails from toy stores proclaiming “RAINBOW LOOM BACK IN STOCK! HURRY WHILE SUPPLIES LAST!” I wanted more than anything not to have a Rainbow Loom. It should also be noted that it awakened some long-forgotten PTSD symptoms related to the Cabbage Patch Kid invasion of the early to mid 1980s. The lines. The anxiety. The rush. The grabbing. The pushing.

And then about a month ago, our OT told me how great the loom would be for both boys’ fine motor skills. Yeah, yeah, whatever. And then a few weeks ago, my six-year-old began coming home wearing bracelets that his friends made for him. Aww, how cute. And then a week ago, he said, “Mommy, can I have a Rainbow Loom?” Bugger.

After several days of begging and good behavior (no potty talk for 24 hours!) and after confirming that our local Learning Express had 4,000 looms in stock (WHILE SUPPLIES LAST!), I bought the infamous Rainbow Loom. Actually, I bought two – one for each kid because the thought of them sharing it (i.e. clawing each other’s eyes out over it) was too much to bear.

When we arrived at the toy store, there was a mob of people hovering around an enormous stack of Rainbow Looms. What was the fuss when there were freakin’ 4,000 of them?  Then I looked closer and realized the fuss had nothing to do with the looms. The fuss – the frenzy – was over the rubber bands, the teeny-tiny slingshots that reminded me of the four long years I wore braces… 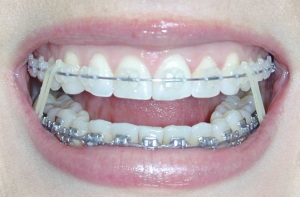 …and had to be purchased a la carte when the 600 that came with the starter kit ran out, which I naively assumed would take a really long time.

The whole scene reeked of Cabbage Patch Kids, but the good news was that the starter kit only cost $16.99. Compared to what most piece-of-crap toys cost these days, 17 bucks seemed like a pretty good deal. Oh wait. The rubber band and c-clip refills cost $3.99 per pack, the glow-in-the dark rubber bands cost $4.99 per pack, and I have no idea how much the plastic storage/carrying case cost (PERSONALIZATION AVAILABLE!) because they were OUT OF STOCK! (Thank God.)

After spending a (very) long Memorial Day weekend with the boys’ my new Rainbow Looms, I know a few things for sure:

I’m all in favor of toys that offer a physical, intellectual, and creative challenge, but when a toy requires my constant participation, it earns a spot on my Toys That I Loathe list. The Rainbow Loom, which is geared toward children ages 8+, is difficult for my six-year-old to operate and nearly impossible for my four-year-old to even attempt. Yes, this makes the Rainbow Loom wonderful for their fine motor skills, but it also makes me crucial to the looming process while they develop the strength and coordination to do it on their own. Or not. Why bother if Mommy will do it for us?

On the contrary, being the only human being in the house who can loom a bracelet hasn’t given me any power or leverage. Instead, it’s rendered me a helpless servant. I’ve been propositioned to loom at least a dozen times while sitting on the toilet or handling raw meat, and I’ve been woken up twice before dawn (on the weekend!) by a little person holding a loom and whispering in my ear, “Can you make this bracelet? I’ve been waiting all night.” Really? All night?

While we’re on the subject of ill-timed looming, bracelet making before coffee (a.m.) and before wine (p.m.) should be illegal. Oh, and I should’ve been a surgeon. My hook work is impeccable.

In all honestly, the boys – my older son especially – can do some of the work with a little bit of help. Regrettably, though, “help” is a four-letter word in my house. Me “helping” them loom or them “helping” me loom is about as fun (i.e. infuriating) as letting them “help” me crack eggs.

In addition to my new grueling looming regime, I’ve been ordered to learn how to loom beyond the single pattern bracelet. Yes, my friends, if you want to loom the really cool stuff, you have to watch video tutorials on YouTube or attend in-store workshops (SIGN UP TODAY! CLASS SIZE IS LIMITED! FIRST COME FIRST SERVE!).

Now, as if I don’t have enough crap to hold on to and/or know the whereabouts of, I’m also in charge of keeping track of everyone’s fakakta bracelets. “Where are my bracelets, Mommy?” How the hell do I know!

Speaking of the bracelets, my six-year-old wore at least ten of his my creations to school after the long weekend. When I picked him up at the end of the day, his arm was bare. “What happened to your bracelets?” I asked. “I gave them away,” he said.

He gave them away.

Now we’re back to square one, and we’re dangerously close to running out of the 600 rubber bands that came with the starter kit, which means we’ll need to go back to the toy store and fight the crowds for refills (WHILE SUPPLIES LAST!).

This too shall pass, but, in the meantime, all this looming is making me feel positively loony.