Mensches and Elves: Surviving the Mental Load of Celebrating Hanukkah and Christmas…One Year at a Time 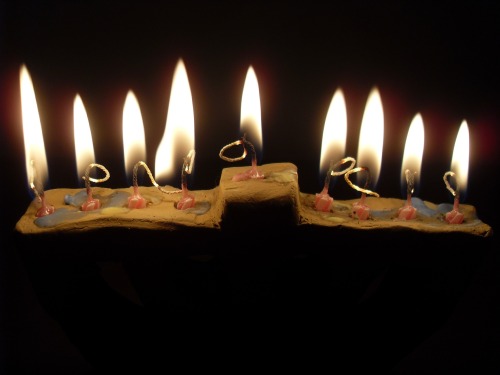 Anyone else out there holding together the mental load of celebrating Hanukkah and Christmas? It’s hard. I get it.

It’s not just that there are latkes and gingerbread houses to make, mensches and elves to move around, and gifts that require a spreadsheet and an arsenal of color-coded wrapping paper to keep organized. It’s also that Hanukkah is a moving target.

She has the power to show up early, late, or any time in between. She’s ruthless and an annual reminder that we have control over absolutely nothing.

If you want to survive the war of attrition that is Hanukkah (at least from a calendar perspective), you need to understand what you’re up against. Where Hanukkah falls during the holiday season can make or break—or tear to shreds—your holiday spirit and sanity.

It’s a crapshoot every year, but there’s one thing I know for sure. No matter which one we get—The Mindblower, The Marathon, or the Sneak Attack—we will always have eight nights of candle wax to scrape off the menorah in the end.

The Mindblower. Otherwise known as Thankgivukkah. This holiday mashup seems like a good idea on Pinterest, but does anyone really want to do holiday and back to school shopping at the same time? Does anyone want to make a challurkey (challah shaped like a turkey) or cook fusion food recipes like Maneschewitz-brined roast turkey and sweet potato noodle kugel? Does anyone ever want to drink Maneschewitz and eat noodle kugel? The answer to all of these questions is no. The early arrival of Hanukkah ruins Thanksgiving and is a bitch to spell, and in conclusion, may we never hear the expression “Gobble Tov!” again…at least until 2070 when this holiday fender bender is forced upon us again.

The Marathon. Or, the middle place. When Hanukkah falls after Thanksgiving and before Christmas, you’ll have some breathing room, but don’t be fooled by the runner’s high you get a few miles in. By the eighth night of Hanukkah, when you realize the behemoth of Christmas is imminent, you might cramp up, puke, or pee in your pants a little bit. As my Weight Watchers coach used to say, “if you fail to prepare, prepare to fail.” You need laser sharp focus, endurance, fortitude, and crap loads of wine (not Maneschewitz) to survive the relentless middle place.

The Sneak Attack. This is when Christmas and Hanukkah overlap. It’s a good idea in theory, but in execution? Not so much. Last year, when the first night of Hanukkah fell on Christmas Eve, I naively thought I’d killed two birds with one stone— Happy Christmakkah!—and I was an idiot. Do you know what happens after Christmas Eve, the first night of Hanukkah, and Christmas morning when your house is trashed, your hands are covered in wrapping paper cuts, the dishwasher is on its seventh load of the day, and your kids are swinging from the chandelier with chocolate gelt and candy canes dripping out of their mouths? Seven more goddamned nights of Hanukkah. Be careful what you wish for.

2017 has given us The Marathon. I hope your present on this first night of Hanukkah in the murky middle place of December is a comfy pair of new running shoes because you’re going need them.