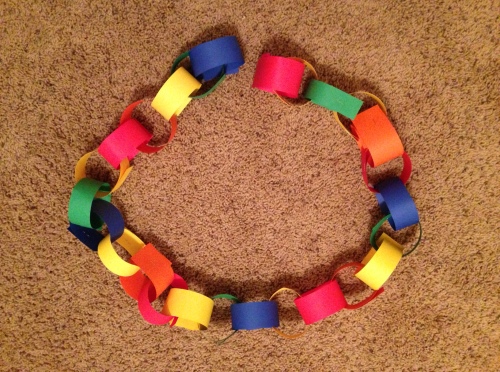 Every night at bedtime, it’s the same routine. Put on pajamas. Brush teeth. Climb into bed.

“Is there school tomorrow?”

I remind my boys of all the things to look forward to the next day. A dress down day or an early release. Maybe a play date.

Then, “Who wants to take a link off the paper chain tonight?”

“Me!” they chant in unison.

We take turns. We cheer, clap, and yell, “We did it!” It’s a little celebration we look forward to each night.

I count the links that are left, because it’s too many to remember.

My husband travels for work a lot. It’s not usually for so long, although there was one time when two weeks turned into three. Another time he was gone for 12 nights. Once it was nine. There have been a bunch of sevens and threes. This time it’s 26.

I try to keep it in perspective. He’s far away, but he’s not on a tour of duty in Afghanistan. I’m no longer changing diapers or doing night feedings. The kids go to school during the day and sleep through the night. They wipe their own butts and tie their own shoes (most of the time).

Still, solo parenting, temporary single parenting, or whatever you want to call it isn’t easy. Daddy’s an ocean away and several hours ahead, and I’m the only adult in the room when there’s a conflict at school, someone gets a foot stuck in a cinder block, or the dog drags a dead rat into the house. (These things do happen.)

It’s precisely because my boys aren’t babies anymore that 26 nights present such a challenge. Out of sight out of mind doesn’t work now the way it once did. On the contrary, their father’s absence is profound. Whereas these trips used to have an intense physical toll on me, now they have a powerful emotional toll on all of us.

I’m the primary caretaker in our household, which means day-to-day operations run smoothly (give or take a dead rat) even when my husband is away. It’s at the end of each night, though, when the chaos of the day winds down, the house grows quiet, and we prepare our tired bodies for bed, that we miss him and long for his presence the most. It’s when I ask, “Who wants to take a link off the paper chain tonight?” that I know we’re not bound by the continent on which we sleep, but rather by the force that connects us as a family. The 26 links on our chain symbolize that bond as much as they measure his absence or return. Even so, every strip of paper we rip off brings us another day closer to being together again, and that’s a pretty good excuse for 26 little celebrations.

This essay originally appeared on Mamalode.

He’s either an artist or a madman.

My nine-year-old’s most recent art installation is titled “Tape on Pencil.” 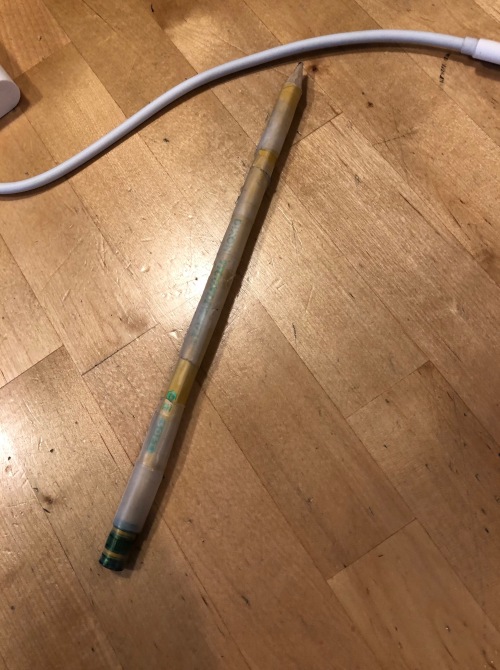 Is it suffocating or is it free? I can’t catch my breath, but I feel like the pencil is safe and sheltered from the storm.

If his dream of YouTube stardom doesn’t work out, adhesive artist has a nice ring to it. He’ll be living at home well into adulthood either way, but at least having a gifted creative under my roof will give me street cred in my neighborhood Facebook group.

When he was four, he drew an elephant that was Picasso-esque enough for me to forgive the boogers he stuck to the wall next to his bed.

Around the same age, his one-man finger puppet show that ended in unspeakable monkey on “fishie” gun violence gave me a chill to the bone, but it evoked the genius cinematic work of (pre #metoo movement) Quentin Tarantino, which was extraordinary for a child who wore Pull Ups to bed.

More recently, “Demented Dora” exhibited a maturity of drawing technique and a deep devotion to savagery.

Now, his exploration of tape with ordinary objects is, well, extraordinary.

This one is called “Tape on Banana on Refrigerator.” 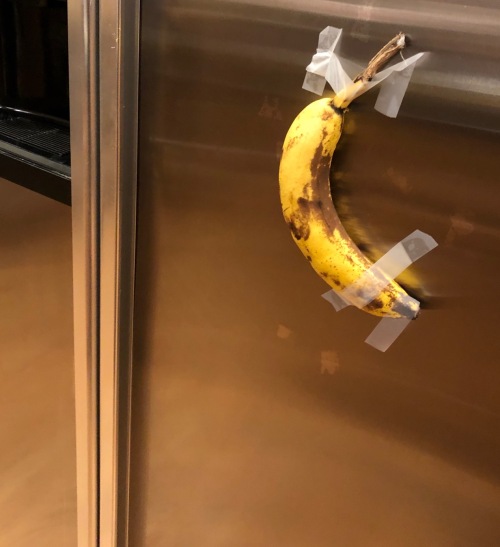 You guys, he ate the banana. As if it weren’t already brilliant.

It has clung to his bedroom wall for as long as I can remember. His vision is limitless.

My son’s artistic prowess is both a relief and a burden. A relief because his struggle with fourth grade math is inconsequential. He has way more important things to ponder than adding and subtracting factions! A burden because I must dedicate my life to his creative pursuits. My purpose on Earth is to nurture his God-given talent, water the seeds of his greatness, and create space for his genius to bloom.

(And hide a few rolls of tape where he can’t find them.)