What’s a mess-over?  It’s kind of like a hangover.  It’s what Mamas feel the day after Mother’s Day, when if they celebrated properly, they took the day off from doing household chores and their typical Sunday routine only to wake up on Monday morning to a sink full of dishes, a pile of laundry to be folded, bills to paid and groceries to be bought.  Today, I woke up with a horrible mess-over.

My husband and kids gave me a perfect Mother’s Day yesterday, including this perfect flower in a pot from Dylan: 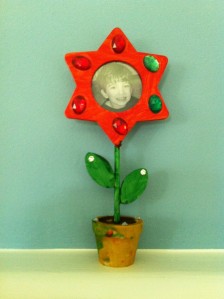 Flowers and a plethora of cards, including this perfect one from Riley: 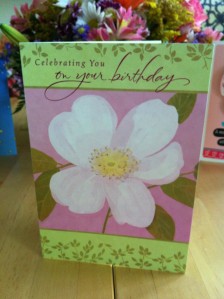 Yes, it’s birthday card, but Riley picked it because he wanted me to have the flower.  This is how he signed the card (as told to Daddy): 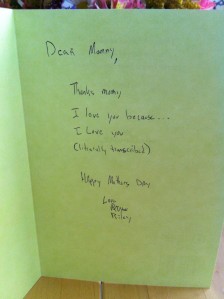 In case you can’t read the handwriting (we know who Dylan inherited his writing skills from), it says: “Dear Mommy, I love you because…I love you.”  Perfection.  Here’s the almost perfect donut the boys picked out for me on their early morning excursion to the card store while I slept in: 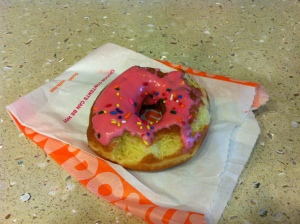 Somebody (Riley) couldn’t resist nibbling the pink frosting before bringing it home it to me.  Later in the day I went shopping and bought these perfect shoes: 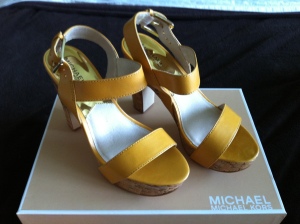 Thank you, Bloomingdale’s, for having Shopaholic Mama’s size (in yellow!) in stock!

That evening, I ate a perfect meal with my family, and Mike lulled the boys to sleep with perfect bedtime songs played on his acoustic guitar.  I even spent a few perfect minutes reading my book, “Weird Sisters,” before I fell asleep.

So far, today has been a lot less perfect.  I woke up to a sink full of dishes (not a surprise), lunches to be packed, and a long list of to-dos (most of which I still haven’t done).   Before I even finished one cup of coffee, I realized a bill was due yesterday.  I also became keenly aware of the enormous pile of mail living on the dining room table.  Pretty soon it’s going to ask me for something to drink.  As I was buckling the boys into their car seats to go to school, I remembered I was in charge of snack for Dylan’s class and franticly pulled together 18 bags of pretzels and 18 cheese sticks (thank you, Costco!).

Upon returning home, Mike informed me that there was a swarm of bugs flying around the kitchen.  My exterminator, who happened to be coming over this morning for our monthly inspection, confirmed Mike’s suspicion that the flying bugs were termites.  Yes, termites.  (Last week, I found two snakes in my garage, and the week before that, there was a lizard in my dining room big enough to give a name.)

After I got off the phone with Terminix to schedule an appointment (that will probably result in us having to tent the house), my neurologist called to remind me of the medical mystery causing numbness and pins and needles in my left leg and foot.  Now I have to have an MRI of my back.  Later in the morning, the woman who weighed me at the hematologist’s office said, “You’ve gained a few pounds.  Have you been going to the gym?”  Was she insinuating that I should go to the gym or that perhaps my workouts have resulted in more muscle, which weighs more than fat?  It doesn’t matter.  I already wished for her to have a flat tire on her way home from work.  Thankfully, the hematologist had nothing bad to say, but he made me wait for over an hour, so I kind of hope he gets a flat tire, too.

This isn’t the Monday I was hoping for.  Did you wake up with a mess-over today?