I read two Huffington Post essays this week about giving birth and new motherhood that brought memories flooding back from my first birth experience.  The first one was “5 Tips For Giving Birth You Weren’t Expecting” by Faith Salie.  I’ve always thought one piece of advice said it all – expected the unexpected – but, I have to say, she lays out some decent suggestions.

To start, Salie suggests putting as much energy and money into preparing for birth as you did when you bought your wedding dress.  “Hire a doula,” she says.  I didn’t hire a doula.  I naively wanted the entire process to be mine (and Mike’s) alone.  Funny, I also found my wedding dress by myself, too.  (I’m such a loner.)  Still, my postpartum experience might have been greatly enhanced by the presence of someone who knew what to do to keep a baby alive and stuff.

Next, on a lighter note, Salie suggests getting eyelash extensions so you’ll feel and look good about yourself in pictures and when people visit you in the hospital.  Since Dylan arrived early and unexpectedly, I didn’t have time to do any grooming.  Admittedly, eyelash extensions weren’t on my “primping for birth” list, but it was a real shame that I had to cancel the bikini and eyebrow wax that was scheduled for the very next morning.  Ironically, when my OB told me to get my swollen preeclampsia butt to the hospital ASAP for an emergency c-section, Harry was at Petco getting groomed.  Lucky dog.  He was less hairy than me at Dylan’s birth.   This is what I looked like the morning after giving birth to Dylan: 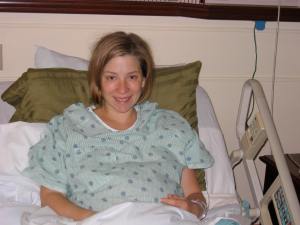 Ugh.  I’m not sure the eyelash extensions would’ve helped.

Editor’s note:  Did I just post that hideous picture of me on the Internet for the whole world to see?  Yes, it appears that I did.

Three and four on her list are bake brownies for the nursing staff (I didn’t do this) and wear a great nightgown (I did do this.)  I was pretty high maintenance after Dylan was born.  In my defense, absolutely nothing went as planned.  The preeclampsia made me feel like garbage, blood instead of milk came out of my boobs, and I had to learn to give myself a daily blood thinner injection to prevent a postpartum clot.   Perhaps some fresh baked brownies would’ve helped make the 36 hours I spent in the hospital less tense?  As for the nightgown, it really did make me feel less like a bleeding, liquid-retaining monster.  Wearing my own clothes helped me feel like me….well, as much as it could considering I had – without any advanced warning (except for the 37 weeks I’d spent with a baby inside my uterus) – become a mother.  Geesh.

Finally, Salie says, “Don’t be surprised if you have FUN.”  She wrote FUN in all caps, not me.  Dylan’s birth was mostly terrifying.  The rushing to the hospital for an EMERGENCY c-section (yes, I wrote EMERGENCY in all caps) and the excruciating waiting that ensued was not FUN.  There was a full moon that night and every pregnant woman within a 50-mile radius was in labor at South Miami Hospital.  There were no pre-op beds available and the waiting room was full, so I had to sit on a folding chair in the stairwell while I panicked about what a c-section was going to be like.  (FUN!)  The anesthesiologist commenting on how my body was so bloated that he couldn’t feel the bones in my spine when he prepped me for the epidural wasn’t much FUN.  Neither was the uncontrollable shaking that the epidural caused and being stuck in the post-op room for three hours because there were no postpartum beds available.

I could go on and on about all the FUN I had over the next two days, but before you decide I’m a miserable person whose only real talent is making women afraid to have babies, let me tell you about one really FUN moment.  The queue for a c-section on that balmy December night in Miami was longer than the carpool line I sit in every afternoon to fetch Dylan at school.  When my OB arrived at the hospital and saw that the nurses hadn’t done my c-section preparations like she wanted, she barked a bunch of orders, which sent them bouncing around like ping pong balls, and insisted I be sent to the OR next.   (Sorry lady in the bed next to me in real – and painful – labor waiting for her doctor to arrive.  Punctuality is a bitch.  You should’ve called my doctor.)  Mike and I couldn’t help but giggle a little bit.  My OB was crazy powerful (I bet the nurses called her “The Tyrant”) and it was crazy awesome that she – the very person who held my hand through a miscarriage, surgical D&C, molar pregnancy, and chemotherapy – got to lift Dylan Lang (and Riley Nathan two years and four months later) out of my bloated belly.  Yeah, I admit, that part was kinda, sorta FUN. 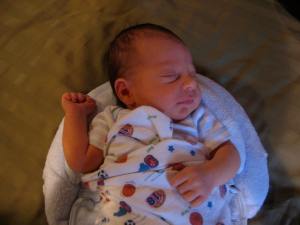 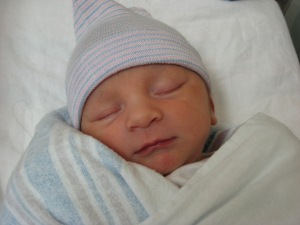 Do you have any tips for giving birth?