Ask anyone for a solid piece of parenting advice and you’re likely to hear this one: Pick your battles. Eight years into this gig, I wholeheartedly agree. Picking battles is excellent advice (and the reason there’s always a cold bottle of white wine in my fridge).

As the Mama of two young boys, I wage many battles. You know, putting wet towels in the laundry basket, brushing teeth twice a day (once would be a victory, actually), using utensils instead of fingers when eating, not screaming in the car, peeing in the back yard but not the front yard, and avoiding FaceTime while on the toilet. I also engage regularly in battles that are sensory specific. These almost always focus on my kids’ fear and loathing of food and clothing.

It’s not easy. Some days, my empathy for their plight over pants and melted cheese tugs at my heartstrings. If it hurts, they shouldn’t do it. Other days, like the one when I volunteered in the lunchroom at school and saw their peers pulling Caesar salad and sushi from their lunch boxes, I went straight home to google residential food therapy treatment centers in lieu of summer camp.

My intentions are always good. I want the very best for my boys and don’t want to enable them to the point where they can’t survive outside of the comfy plain spaghetti with parmesan cheese on the side bubble in which they mostly live, but at the same time, I suck at waging war. It’s not that I’m lazy. It’s just that arguing over buttons or watching them go to bed hungry because they won’t taste a single bite of what I make for dinner is heart wrenching, frustrating, and exhausting, and my adrenaline only lasts so long before I lose my will.

Imagine my turmoil when a flyer came home from school inviting my six-year-old son who dislikes with fervent passion buttons, zippers, pockets, collars, and belts (oh my!) to a Kindergarten Fairy Tale Lunch. The flyer instructed the girls to dress like princesses and the boys to dress like princes in dress pants and button down shirts. Crap. The flyer ended with a royal flip of the middle finger, er, I mean, a friendly reminder that no masks or weapons were allowed. Crappy crap. Had I been able to send my son to school with a sword, the whole thing might not have been such a big, crappy deal. (Maybe.)

Sensory issues aside, the last thing my kid wanted to do was dress like a prince. Why didn’t they do a princess and superhero lunch or a princess and pirate lunch? I could’ve easily supported the dress code for either of those themes! Instead, I had to dress my son for a funeral while the girls delighted in wearing Elsa costumes or big, colorful tulle skirts and fancy shoes.

To make matters worse, I received an email from school a few days later announcing that there would be a school-wide dress down day on the same day as the Fairy Tale Lunch. That meant not only did I have to get my six-year-old son dressed for a job interview, but also his older brother would be strutting around the house wearing his favorite Under Armour t-shirt and mesh athletic shorts. Crappedy-crap-crap.

I thought of a million and one reasons (okay, three) to let him interpret his prince fashion any way he wanted (i.e. to not dress up): (1) he didn’t want to dress like a prince, (2) it was a dress down day for everyone else, and (3) it was going to be a miserable battle that would end with yelling, tears, threats over screen time, and quite possibly a six year old boy in the car in his underwear.

We had an OT session scheduled the afternoon prior to the lunch, so I did what any Desperate Mama would. I threw his prince pants (i.e. khaki’s with a zipper, belt loops, and a button) in my bag and put the fate of the battle in the hands of our OT. She would decide if he had to wear the pants, and if so, she would get him to do it.

Side note: Outsourcing is another great piece of parenting advice. There’s no shame in letting others help fight your battles. It takes a village, people.

“Someday,” she said, “the Fairy Tale Lunch will be a school show, an awards ceremony, or a prom. He needs to do this. He needs the coping skills to live a full life.” I agreed, but…

“He needs to modulate,” she said. But he doesn’t want to be a prince!

“He needs to adapt,” she said. But it’s a dress down day!

“He needs to be uncomfortable,” she said. “It’s the only way he’ll learn.” But it will be hard!

In that moment, I realized the battle over the pants was as much mine as it was my son’s. My excuses to support (i.e. enable) skipping the nice clothes would, in the long run, help no one. The hard part of parenting sensory kids (or any kids, I suppose) is knowing when to push or pull, expose or protect, or hug or punish. That, and accepting that sometimes good parenting feels bad (another rock solid nugget of parenting advice). Once I quieted the well-intentioned but indecisive and unhelpful voice in my head and stood confident with my choice, the battle over the pants lost its power.

He would wear the pants.

Easy isn’t the best word to describe getting him dressed the next morning, but it was hardly the battle I imagined. He wore the khaki pants, a belt, a nice short-sleeved shirt, and a homemade crown and red cape. Princes wear superhero capes, right? He got dressed with minimal bargaining and negotiating, and we got to school on time to boot! I couldn’t have been more proud…of us both.

He wouldn’t let me take a picture, but I snuck this one while he frolicked happily through the house before we left for school. 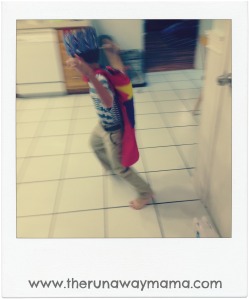 It was a princely battle, indeed, but any way you look at it, we were both triumphant. 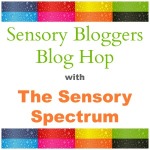 CLICK HERE TO READ OTHER FABULOUS POSTS IN THE APRIL 2015 SENSORY BLOG HOP:

7 responses to “A Princely Battle”