I see this hashtag all the time. If it’s not #thisis7, then it’s #thisis5 or #thisis3. Parents capture a moment in time that epitomizes their child’s age, smack a filter on it, and post it on social media.

I’ve done it myself. Not the naked thing, the hashtag thing. There are moments that exemplify the sweetness of two, the irrationality of three, the stubbornness of four, or the pride of five.

The generalization of ages and stages are largely true. Most one-year-olds are delicious…

…and most four-year-olds are silly… 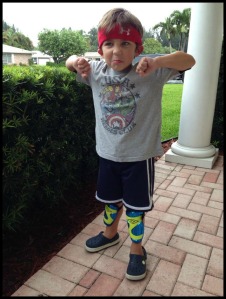 There is no truer depiction of #thisis6 to me than than this.

Six is bored and “hangry” and MY FEET HURT at the Statue of Liberty so everyone else must suffer, too.

And so is this.

Is my six anything like your six? Maybe, maybe not.

But #thisis[fill in the age] isn’t really for everyone else. It’s for us. Our relentless desire (need? obsession?) to capture perfect (I use that term loosely) snapshots of our kids personifying their age comes from a place of love and pride, and in many cases, from debilitating guilt over not making proper baby books. Besides that, it keeps Facebook memories, #tbt, and apps like Chatbooks in business.

We all think our kids are the bee’s knees, and that’s okay. My sometimes grumpy, blue-eyed superhero gamer is seven today and he’s #oneofakind.

He drinks a cup of Kefir every morning like coffee. (Seriously. Do not make eye contact until he’s had his Kefir.)

He wants to create a YouTube channel where he can review video games and toys.

He plays Minecraft, Roblox, and other computer games with the skills of an unemployed 20-something who lives in his parents’ basement. (Ruh roh.)

His gamer name is Nutty Riles.

His friends at school call him Nutty.

When he grows up, he wants to be a scientist and find a cure for diabetes.

He loves to draw.

He has training wheels on his bike.

He doesn’t know how to tie his shoes.

He has some serious boyhood angst about having a name (Riley) that’s for girls, too.

He loves getting mail, “reading” Oriental Trading catalogs, and circling everything he wants. When he does this bizarre activity, he always circles luau-themed foam can covers for his Daddy’s beer.

He remembers every single time he’s seen me cry.

He has no front teeth.

Last week, he had a threenager tantrum because I wouldn’t let him eat a cookie right before dinner.

When he cries (for real), tears don’t stream down his cheeks. They squirt a good six inches from his face.

He hates having his hair washed.

He believes in God.

He lights up when he sees an empty box he can turn into a racecar or an airplane.

He loves bread. We call him the Bread King.

He’s was so excited to celebrate his 7th birthday at school that he wore a cape for the occasion. Makes perfect sense. 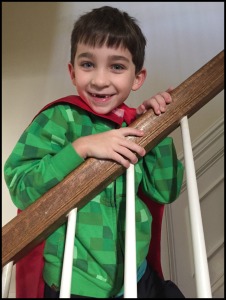 Leave a Reply to The Runaway Mama Cancel reply