A Hula Hoop of One’s Own

“Is it because you didn’t practice enough?” In these final days of summer, structure—and instrument practice and pants wearing and tooth brushing—has been of little concern. Case in point, my son changed from his pajamas into clothes just before and only because of his 5:30 p.m. drum lesson.

“No, it’s because it was complicated. I learned the flam.”

“What the heck is a flam? I’ve never heard that word before.”

By the time we reached the car, he explained that it’s when you hit two drums at two different heights at almost the same time. Or something like that. On the drive home, he showed me the flam using the passenger side dashboard as a drum.

“The car is not a drum!” I scolded him, only half-believing the words as they came out of my mouth.

Not to be outdone by his older brother, my little guy who began taking guitar lessons earlier this summer piped in from the backseat with, “Oh yeah, ‘Eddy ate dynamite good bye Eddy!’”

And because sibling rivalry is absolutely a thing, my front seat drummer boy upped the ante with the presentation of a seventeen stroke roll. On the dashboard. Again.

My kids were schooling me. “What in the world is a seventeen stroke roll?”

I’ve been stumped many times by my boys. Minecraft realms, YouTube “vids,” and ridiculous text talk come to mind, but that knowledge gap feels generational. You know, In my day, we walked uphill…in the snow…both ways!

At school, common core math has been a major stumbling block. Don’t even get me started on multiplying mixed fractions, but there was once a time when I knew how to do it (I think).

Flams, stroke rolls, and Eddy’s dynamite, though, were way outside my hula hoop.

I’m not my kids’ only teacher (nor should I be!) but it’s startling when knowledge and skills from other sources surpass my “mom” curriculum. Even more, it’s humbling to witness them learning things I never dreamed of learning myself.

When we got home, I asked my son to teach me how to do a seventeen stroke roll. On the stairs to the basement where the drum set lives, he explained that there were five, seven, and nine stroke rolls, too.

I did it, but it was awkward and my hands moved in slow motion compared to my son’s machine-like rhythm after more than a year of lessons. His drum skills were impressive, and it was an utter joy to find myself in his hula hoop. I think he quite enjoyed it, too.

I fumbled through a seven and a nine stroke roll just for the fun of it before handing the sticks back to the professional. Upstairs in the kitchen, I asked my younger son to tell me more about Eddy and his dynamite while I marinated chicken. He happily obliged.

These little human beings belong to me, but they are not mine. Their hearts and minds and curiosity and drive will take them to hula hoops far away from mine, and I can’t wait to see what they teach me next. 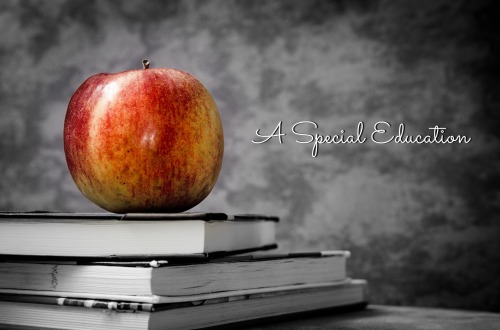 Dr. V. wore a pinstripe collar shirt and a light gray tie with small brown dogs printed all over it. It matched his personality. During my son’s assessment, he laughed at his jokes and answered every one of his questions, even the silly ones.

Dr. V. spent the last 45 minutes explaining to me in depth the results of my son’s vision evaluation. Not be confused with his eyesight examination. His eyesight was fine. He didn’t need glasses. If only.

I knew where we were headed, because we’d been there before. Vision therapy. We would spend the next six months (or more) – including the summer vacation – doing twice weekly vision therapy, and it would break my son’s heart.

How is it fair that one kid has to deal with all this crap? Do you know how many doctors, therapists, and tutors he has? He’s 10! There aren’t enough hours in the day! Will it even help? Should I just let him be? Am I ruining his childhood? Will he like reading when it’s all done? Will his handwriting be neater and his homework be less unbearable? How do I know when I’m pushing him too hard or not hard enough? Does he know how smart, kind, intuitive, brave, and imaginative he is? Will he live a happy life? Does he resent me for insisting on these interventions? Does he begrudge me for not doing more? Will it get worse or better as he ages? Is it affecting his self-esteem? Is it my fault? Why do I have to be an OT, ST, VT, SPD, ADD, IEP expert? Why can’t I just be his mom?

“Why is this so hard?” I blurted out.

Dr. V. chuckled. “No one teaches us about this stuff before we have kids,” he said. “Being a parent is a special education, isn’t it?”

Dr. V. looked about my dad’s age. His kids must’ve been grown. He’d been through the hard bits. He was incredibly patient and had a comforting vibe that gave me hope that, in the long run, everything would be okay.

Still, I wanted to climb across his desk and inhabit his body. I was desperate to see my journey from his vantage point. I ached for my future self to tell my present self  that everything would be okay.

But, just as I knew I had to persevere and do the hard work to get to the other side of vision therapy, I also understood I had to persist and do the heart-filling (and heartbreaking) work of raising my boy.

Someday, I would be on the other side. Someday, I would understand the meaning of everything’s going to be okay, but it wasn’t my turn yet. I thanked Dr. V. for his time, put my son’s name on the vision therapy waiting list, and headed home.

Welcome to Voices of Special Needs Blog Hop — a monthly gathering of posts from special needs bloggers hosted by The Sensory Spectrum and The Jenny Evolution. Click on the links below to read stories from other bloggers about having a special needs kiddo — from Sensory Processing Disorder to ADHD, from Autism to Dyslexia! Want to join in on next month’s Voices of Special Needs Hop? Click here!