Guess what?  I’m doing my first-ever Runaway Mama giveaway!  As Lightning McQueen would say, “Ka-Chow!”  Except this post is about “Madagascar,” so as Marty would say, “That’s off the chizain!”

Before I explain the promotion, let me tell you a story.

A few years ago, Mike and I received a frantic call from our babysitter.  After she put Dylan to bed, she heard him through the baby monitor saying, “I can’t breathe, can’t breathe, darkness creeping in.  Can’t breathe, walls closing in around me.  So alone, so alone.”  After we stopped laughing, we explained to her that Dylan wasn’t hallucinating; rather, he was performing a monologue from his favorite movie, “Madagascar.”  It was from the scene where Alex, the lion, is stuck in a crate en route to Madagascar.

And so began our wild ride with Dylan and “Madagascar.”  That Halloween, Dylan refused to wear a costume.  In fact, he opted out of Halloween altogether, but that doesn’t mean I didn’t try like hell to make him a costume he would love (Crafty and Crazy Mama!).  Behold:

A flat screen television and remote control showing the movie!  I was particularly proud of this costume (check out the craftsmanship on the remote control!), and when Dylan refused to wear it (and after I finished weeping from his disapproval), I wore it myself.

For Dylan’s third birthday, he had a “Madagascar: Escape 2 Africa” cake: 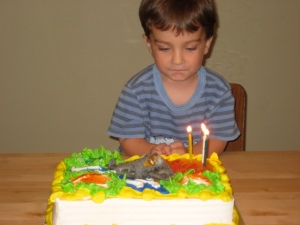 This was one of his favorite birthday presents: 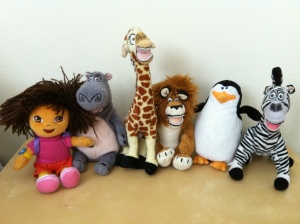 (Who doesn’t belong in this picture?)

Shortly after Dylan’s birthday, we visited the Miami Zoo and saw Alex, Marty, Gloria, and Melman in the flesh!

Notice Dylan’s t-shirt.  In our family, we go hard or we go home.

That spring, Dylan’s preschool teachers told me the story of how each child in the class was asked to name their favorite animal during circle time.  When it was Dylan’s turn to answer, he said (after a long, pensive, and concerning silence), “Alex, Marty, Gloria, and Melman.”

These days, “Madagascar” and “Madagascar: Escape 2 Africa” play on a continuous loop (between “Cars 2” and “Star Wars: The Clone Wars”) on our DVD player.  Riley is catching up nicely, which is a good thing, because “Madagascar 3: Europe’s Most Wanted” will be in theaters in June.

And here’s where I tell you about my super-exciting, first-ever Runaway Mama giveaway!  Yah!  Here are the details:

Ten lucky SOUTH FLORIDA readers have the chance to win passes to an advanced screening of “Madagascar 3: Europe’s Most Wanted” on Saturday, June 2nd at 10:30 a.m. at either the AMC Sunset Place in South Miami or the Cinemark Paradise in Davie.

If you’d like to enter (each winner can invite three guests), leave a comment here telling me why you love “Madagascar” and/or who your favorite character is. (In case you’re wondering, my favorite character is Melman.  For obvious reasons, I can relate to his anxiety and hypochondriacal tendencies.)

Please do not enter if you can’t arrange your own transportation and/or lodging.  Winners will receive movie tickets ONLY.  As Alex would say, “Don’t bite the hand that feeds ya!”

The deadline to enter is midnight on Friday, May 25th.  After that, I’ll choose 10 winners at random.  Good luck!

I took the boys to the Naples Zoo today.  It was our second attempt because we were originally supposed to go on Monday, but, if you recall, I woke up with the plague that day.  The reason we went (besides why not?) is because I promised Riley I would take him and Dylan once he was fully potty trained.

Note to parents who are at the beginning of their potty training journey:  Don’t be reckless with your potty training promises.  These kids might not remember where they left their shoes, but they sure as hell won’t forget if you promise them a trip to Disney World for pooping in the toilet.  I, for one, am a Proud Mama for my totally manageable (and affordable!) promise.

For us, the Naples Zoo is just across Alligator Alley, about an hour and a half from home.  The ride out was fine except for one nasty storm, but the rainbow that came with it was exquisite and worth the hassle.  I only wish I could’ve taken a picture, but I was busy driving…and opening up bags of pretzels, passing Sippy cups back and forth, and peeling bananas. You think texting and driving is dangerous?  Try parenting and driving.  Anyway, we made it across the Sunshine State with one pee stop, and we were inside the gates of the zoo by 10:30am.

No one was happier than Dylan that the Naples Zoo encourages people to bring their own food, including orange crackers.   (I was happy, too.  When we go to the Miami Zoo,I have to smuggle food inside.  Shh.)

This was the Primate Expedition Cruise, a boat ride that sails around small islands where apes, spider monkeys and King Julien (i.e. lemurs) live.

These apes were monkeying around like two other primates I know… 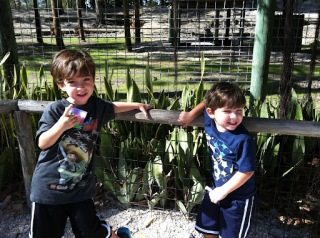 When the cruise was over and we were getting off the boat, I turned to the captain and said, “Thank you.”  Dylan turned to him and said, “I love you.”

This is what I packed for lunch.  Ha!  Early April Fools Day!  The lettuce was for feeding the giraffes.  The zoo has five “baby” giraffes that are huge and beautiful, and I will never, ever get tired of watching giraffes.

We went on a camel ride!  While we were on the very-short-for-the-amount-of-money-it-costs-but-at-least-the-money-goes-to-helping-the-zoo-and-the-animals ride, I told the boys the story of when I rode a camel in Israel when I was a teenager.  I left out the part where the camel threw me off his back and I landed face down on a rock.  Thankfully, today’s ride had a happy ending.

“Mommy, are you sure there are no hippos at this zoo?”  There aren’t.  We’ve been home from the zoo for several hours now and Dylan still won’t let it go that we didn’t see the hippos – hippos that do not live at the Naples Zoo.  This irrational dispute between a mother and son could last a lifetime.

This was Riley’s “Mommy won’t let me have M&Ms before lunch” face.

Just so you know, buttery, salty, greasy zoo popcorn puts Dylan in the mood to strike a pose.

This was Riley’s not-so-subtle hint that the zoo trip was over.  (Sorry about the finger on the lense…I was tired, too).  Riley rolled up into a ball like a roly-poly pill bug and I had to carry him (Strong Mama!) until we reached the gift shop where he had a miraculous surge of energy, so much so that he was able to pick out a bag of plastic frogs as a souvenir from our special day.  Tired little Dylan mustered up the energy to pick out something, too.

I had such a good and easy time taking these two boys to the zoo today (across the state and on my own) that I think I might finally be ready to get on an airplane with them.  Or maybe that’s the post zoo Pinot Grigio talking.