Anatomy Of A Friday Night In My Bed

Don’t worry.  This post is G-rated.  There are far too many children and animals roaming in and out of my bed for anything R-rated to take place.  And I wouldn’t write about it anyway.  A blogger has to have some boundaries, right?  So, we’ve established that there’s no sex in this post.  There are, however, some really poorly drawn pictures to illustrate the night.  They’re the kind of images you’ll want to turn away from, but like a really bad car accident or train wreck, you’ll be unable to look away.  You’ll also wonder if perhaps Dylan did the drawings.  He didn’t.  I’m a horrible artist, but I can’t be good at everything, because then you’d hate me.

Last night I fell asleep on the couch, so Mike went to bed alone.

I crawled into bed at about 1:00 a.m.  This is where you might think something romantic took place.  Ha!  Sleep is too precious a commodity in this house these days.

That’s Mike on the left and me on the right.

At about 1:30 a.m., Dylan woke up crying from a nightmare and wouldn’t go back to sleep in his bed, so Mike brought him to our room.  This was a risky move, because Dylan isn’t typically a good bed mate. 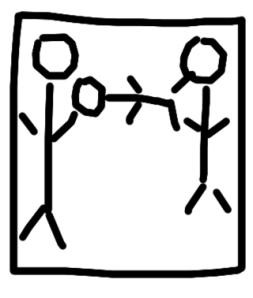 That’s Dylan in the middle.  What is it that makes kids want to sleep horizontally?  And kick their Mamas and Daddies in the head and back all night long?

At 5:00 a.m., Dylan yelled out “I want to get up.”  I replied, “No.”  I waited all week for this glorious Saturday morning when I wouldn’t have to set the alarm for 6:00 a.m., make lunches, and chase the boys around the house to get them dressed and brush their teeth.  There was no way in hell I was getting up.  Apparently my “no” was just the right tone, because I shut the whole thing down (Akin pun intended).  Dylan fell back to sleep and resumed his horizontal assault.

At 5:30 a.m.,  Riley joined us.  At least his presence forced Dylan to succumb to the vertical.

From left to right – Mike, Dylan, Riley, me. 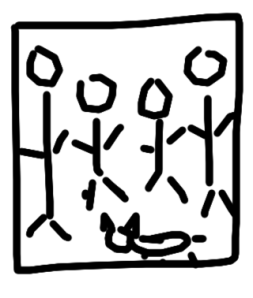 You know what they say… A family who sleeps together, stays together is bruised, cranky, and exhausted all day!

Yes, he’s a better artist than me.

How did you sleep last night?