Six Is So Much Different Than Five (And A List!)

Today is Dylan’s birthday.  Not his birthday party day or his practice birthday, but his actual birthday.  He’s six years old.  I’m honestly not sure how any of this happened.  I mean, seriously, how did he go from this… 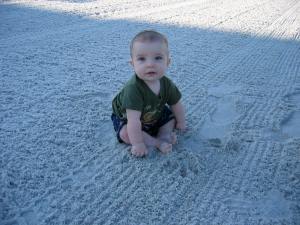 Sources tell me this is commonly referred to as growing up, but I don’t believe them because if I’m not getting any older – and I’m not – how on earth is he?

On previous birthdays, this alleged growing up phenomenon wasn’t a big deal because even when Dylan went from two to three or three to four years old, I could still squeeze his chubby thighs, sing songs to him at bedtime, and kiss his boo boos to make them feel better.  But on this birthday – this sixth birthday – I have mixed emotions because I’m quickly realizing that six is so much different than five.  Here’s how (in no special order):

One thing that hasn’t changed at all is the whining.   There appears to be just as much whining at age six as there was at age five.  In fact, it might actually be worse.

2 responses to “Six Is So Much Different Than Five (And A List!)”