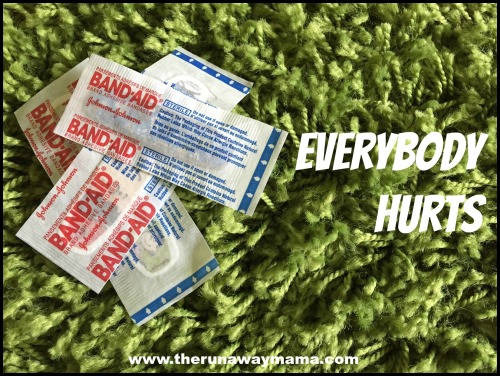 “How long have you had it?” asked him.

It looked painful. I had him wash his hands and then I put antibiotic ointment and a bandage on it.

“Do I have to go to the doctor?” he asked nervously.

I hate when my kids don’t tell me when they’re hurt. They wake up every morning complaining about ambiguous aches and pains to avoid going to school – I have a stomachache! My throat is sore! My nose hurts! – but when something truly causes pain, they hide it.

I was worried my son’s nail would get infected, and I was annoyed that he kept it from me. Mostly, though, I felt an all-too-familiar stab of guilt that I didn’t know about it.

About a year ago, I discovered my older son had plantar warts on his feet. It wasn’t a few warts or even a small bunch. It was dozens of warts all over the bottoms of his feet and toes, and I had no idea. None! No matter how many times the dermatologist said, “This happens all the time,” I couldn’t (and still can’t) shake the sting of embarrassment I felt about not knowing something was wrong with my child.

The catch-22 of instilling independence in our kids is that when we stop micromanaging everything they do, there’s a good chance they’ll fix themselves a bowl of cookies for breakfast, wear the same underwear for a week straight, or hide (ignore?) a throbbing hangnail or wart outbreak to avoid the pain of fixing it. It’s not negligence on our part, but rather it’s the inevitable bumps and bruises of gradually letting go. Unfortunately, it doesn’t relieve the guilt.

I told my husband about the hangnail.

“Why didn’t he tell me?” I asked, still irked about it.

“He’s a kid,” he said. “Remember when you were a kid and you hid your medicine in the couch?”

He was right. When I was a little girl, I had this bizarre combination of strep throat, scarlet fever, and some other plague that required endless doses of medication. Several times a day, my mom or dad would give me a handful of chewable acetaminophen and a teaspoon or two of liquid antibiotic, all of which I hid under a couch cushion or poured into a napkin and tossed into the trash when they weren’t looking because I didn’t like the taste.

All hell broke out when my mom discovered the pills in the couch. My parents weren’t just angry at my behavior. They were also terrified that I endangered my health. Now that I’m a parent, I understand how they felt, and I can only imagine the humiliation they endured when they had to explain to the pediatrician not only what I did but also that they had no idea I was doing it.

My husband had a point. Everybody hurts, and we’re all to blame at some point for ignoring it, hiding it, putting it off, or pretending it’s not there to avoid dealing with it. Dodging scary medical interventions – nail clippers for hangnails, cryotherapy for warts, yucky tasting medicine for illness, or worse – is a rite of passage for kids, and dealing with the consequences of what our children conceal is an equally expected lesson for parents.

It was just a hangnail (this time), but it was also a valuable teachable moment. I need to talk to my kids more often about the importance of speaking up when something hurts (physically or emotionally) and about the benefit of taking care of our health even when it’s unpleasant. I also need to give myself a break in the guilt department because when something really hurts my kids – when wearing pants is agony, when fractions homework is torture, or when eating cucumber slices is excruciating – they couldn’t hide their pain if they tried.

Filed under going to the doctor, health, parenting