“The Million Dollar Fuck-Up” is probably a better title.

Spoiler alert: This story doesn’t have a very happy ending.

The weather in northern New Jersey has officially shifted from fall to winter. Chilly mornings and sunny afternoons have given way to bitter cold, cloudy, and windy days with occasional snow flurries. In other words, it’s time to wear pants.

At bedtime last night, I told my sensory sensitive seven-year-old son who hates nothing more than wearing pants that he would have to wear them to school in the morning.

“Will you pay me six thousand dollars?” His blue eyes sparkled with mischief.

“Will you pay me a million dollars?” 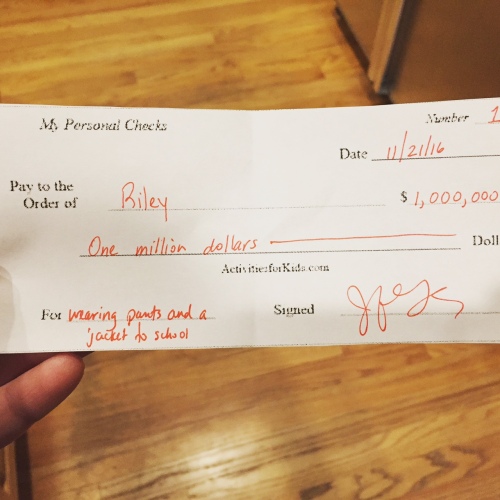 It seemed like such a good idea the night before. That morning, not so much. When I confessed that the check was fake, my son was heartbroken. He was Lloyd Dobbler in “Say Anything” when Diane broke up with him and gave him a pen.

I gave her my heart, she gave me a pen.

I gave my son a fake check. I gave him a fucking pen.

Needless to say, things got worse before they got NOT BETTER AT ALL. I apologized for inadvertently hurting his feelings and tricking him. Tears squirted from his eyes, he threatened to take the pants off, and he wouldn’t budge from the staircase. Our surprisingly easy morning turned into a shit show, complete with a stand-off, irrational negotiations, and some miserable but necessary tough love.

Outside, the wind whipped. I was desperate. “If you keep your pants on, I’ll take you to the toy store after school.”

“I’m wearing shorts and you’re taking me to the toy store because you lied to me!” Ouch.

This grueling back and forth went on for a long while. In the end, he kept his pants on, but we were late for school and he refused to hold my hand on the walk from the car to the main office, which was his way of giving me a pen (and stabbing me in the heart with it and twisting it in both directions).

Did he need to wear appropriate clothing for the weather? Yes. Did I inadvertently lie and hurt his feelings? Also yes. Did I take him to the toy store after school? You betcha. Guilt is expensive, and for the record, I paid with cash, not a check.

The lessons in this cautionary tale require bullet points.

One response to “The Million Dollar Mistake”