I let the boys play hooky from school on a recent Friday so we could meet up with friends who were in town for the weekend. I don’t typically condone such truancy, but I thought it would be a good idea to reconnect with old friends.

We took an early train into the city and then a cab downtown to the Freedom Tower where we all met up. We spent the morning exploring the One World Observatory, which was stunning. After that, we walked over to the 9/11 Memorial reflecting pools. It was the first time I saw them in person, and it was as emotional as I imagined. Thankfully, my boys asked plenty of awkward questions which kept me from completely losing it. Next, we had lunch and cupcakes at Hudson Eats followed by ice skating at The Rink at Brookfield Place. After that, the kids ate more cupcakes. (They were that good.). When we finally said our goodbyes, or our “see you soons” as I prefer to call them, I hailed a cab and we headed back uptown.

We had an amazing day, but once we settled inside the taxi, exhaustion set in. The sun was beginning to set, we had a long trek home (taxi then train then car), and we’d been on the go since breakfast. Dylan stared outside the window on the driver’s side of the cab with a glazed look in his eyes. Riley, in the middle, dozed off as soon as he buckled his seatbelt. I poked his right side with my elbow a few times because I knew waking him up to slog through Penn Station to make our train would be a disaster, but eventually I gave up and let him drift to sleep.

As our cab zig-zagged up Sixth Avenue, I contemplated the day. On the 100th floor of the Freedom Tower, I thought of when every inch of New York City was my backyard. At the reflecting pools, I remembered the horrors of that gruesome day, but I also thought of how proud I was to be a New Yorker and to experience the heart, grit, and resilience of the city. At lunch, the legions of chic and professionally dressed millenials eating sushi rolls and artisanal grilled cheeses made me wistful for the years I spent climbing the ladder in public relations. While I caught up with my friends and watched the boys and their friends talk, play, and skate together like no time had passed, I longed for the ease and familiarity of our life in Florida.

A mix of nostalgia and regret washed over me as the past two decades swirled around my head. I missed the bustle of the city, the promise of my career, the freedom of my pre-kid life, the comfort of Florida, and our close-knit community of friends. Nothing was the same, and I wanted it all back, but I also felt a fierce jolt of gratitude that I ever had any of it in the first place. Outside the taxi, the energy of the city beckoned, but inside the car, the rhythm of my boys’ breath as they slept after a long and happy day with friends jerked me back to the here and now. Someday, I realized, I would miss this, too.

My boys weren’t the only ones who played hooky that day, and I couldn’t wait to do it again. 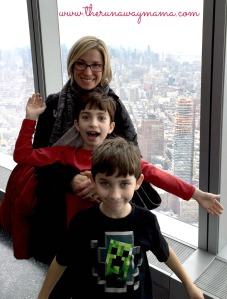 I’ve read a lot of essays about the loneliness of motherhood. Hell, I’ve written about it myself! When I first became a mother, I had very few friends with kids. My husband worked (and still works) long hours, and my pre-kid life-long friends lived (and still live) far away. All these years later, I’ve made many great connections and have started new and cherished friendships, but the truth remains that the daily act of mothering, particularly as stay-at-home-mom, is often a lonely and isolating experience.

Now that my kids are seven and five years old, I feel something shifting. Whereas I once did absolutely anything to escape my kids, I now find myself asking, “Who wants to come with me to the grocery store?” A few weeks ago, Mike and I took the kids bowling on a Saturday night, and, believe it or not, we had fun. A few months back, we took the kids to Disney World for a weekend. For 36 hours straight, we spent every waking and sleeping hour together, and when we returned home, I was sad that we couldn’t stay longer.

Recently, in the bathroom at a local frozen yogurt shop, Dylan and I laughed until our stomachs hurt after Riley scared the crap out of us (pun intended) with a startlingly loud and explosive fart.  Just a few days ago, we all giggled when Riley let Gertie give him “mouth kisses” over and over again and Dylan announced, “Riley and Gertie are married!”

More and more, I want to be with my kids. I don’t crave a Saturday night babysitter as much as I once did, and if I do, it’s because I want time to connect with my husband as opposed to time away from the kids. Each weekday, I appreciate my alone time, but I also can’t wait to get the boys in the car at the end of the day and hear all about their adventures at camp.

It’s not that I haven’t enjoyed raising them until now or that this parenting gig has gotten any easier. Hardly!  Rather, it’s that my little boys are developing into charming, funny, curious, and smart little people, and I truly enjoy their company. (That, and they finally wipe their own butts.) I’m not so much surprised by this new feeling as much as I’m totally and completely delighted.

I’ve never been the kind of person to have a gaggle of girlfriends. I’m more the type to count my dearest ones – near and far – on the fingers of one hand. Now, it looks like I need to start counting the fingers on my other hand, too.