My neighbor across the street just had a baby.  It’s her second child.  Her second girl.  Over the weekend, I saw her for the first time since the baby was born.  She was sitting in a lawn chair next to a bassinet and watching her four-year-old daughter ride her bike around the driveway.

I walked across the street to congratulate her and asked, “How are you doing?”

Her response was refreshingly candid. “Awful,” she said.

Her c-section incision hurt like hell, she was exhausted, her husband was at work (on the weekend no less), and at 4pm, she had only just showered.  She was just seven days into the madness of having two kids.

I’ll never forget the depth of awfulness that engulfed me after I brought my babies home from the hospital.  Of course, there was love and bliss and wonder, but the awfulness was there, and it was thick and sticky.

When Dylan, my first, came home, the awfulness came from perpetually trying not to accidentally kill him during any of the following activities: feeding, bathing, diapering, dressing, undressing, strolling, driving, rocking, singing, or holding.  Did I ever tell you the first diaper I ever changed was Dylan’s?  True story.  Figuring out what all of his noises and cries meant, leaving the house with less than three hours notice, changing his diapers without getting peed or pooped on, learning how to fold and unfold the stroller without bodily harm, trimming his teeny baby nails without cutting off any of his teeny fingers, and surviving one long, dark night after another were daunting experiences.

When Riley came along, it was a lot easier to not accidentally kill him, but new forms of awfulness lurked.

There was sibling rivalry, and a result, guilt.  Oh, the guilt!  There was pain.  Recovering from a c-section, or any form of childbirth, is difficult when you never stop moving.  There was sleep deprivation.  Actually, it was more like sleep zilch.  Sleep zero.  (There was a brief period of time in late 2009 when Riley and Dylan took the same afternoon nap.  It was miraculous and, to this day, is one of my proudest parenting achievements.)  There was juggling. Breastfeeding while simultaneously flipping grilled cheese sandwiches, finding “The Big Red Chicken” episode of “Dora the Explorer” On Demand, doing puzzles, getting the Moby wrap on and off without strangling myself, and folding laundry (oh, the laundry!) was hard.  Really hard.  It was chaos.  Period.

Oh, I remember the awfulness.

My neighbor will find a rhythm.  She’ll discover a new normal.  She’ll learn how to juggle, and she’ll eventually feel rested (or at least not murderous) on three hours of sleep.  But right now she’s isolated, overwhelmed, and tired beyond all belief.  Seeing her gave me an overwhelming urge to go shopping.  (For her, silly, not me.) 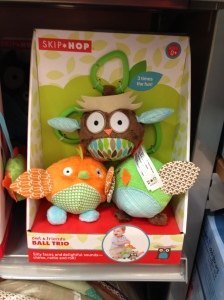 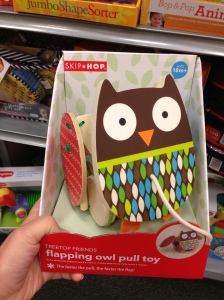 I want another baby just so I can buy more owls.  (Did I just write that?)

I settled on this little guy.

And to keep big sister busy… 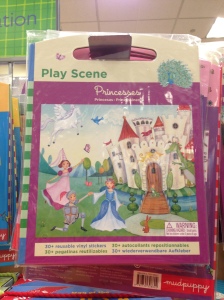 Then I bought a bunch of easy to grab, healthy snacks. 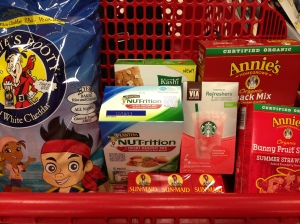 Last but not least, the cards.

Inside Mama’s card, I offered to watch the baby or have her older daughter over to my house for a play date with the boys so she can nap or shower or pee or scream into a pillow all by herself.  (I didn’t actually write that last part.)

Hopefully she can use the bucket in the nursery or elsewhere in the house.

As our kids get older, school days grow longer, sleep comes easier, sanity returns (sort of), and awfulness recedes, we mustn’t forget the Mamas just getting started on this wild ride or the Mamas preparing to climb the next big hill.  We’ve all been there.  For many of us, we’ve been there more than once, and some of us just might find ourselves there again.

Any New Mamas in your life?

The second Huffington Post essay I read about giving birth and new motherhood is “What Not to Say to a New Mother” by Meredith Fein Lichtenberg, CCE.  The piece is about the things hospital staff say that – intended or not – undermine new mothers and fathers.  The piece definitely has a pro-breastfeeding and anti-formula advertising slant*, but the overarching point is that undermining behavior happens across all areas of baby care.  Just like the first essay, this one brought me straight back to the hospital when Dylan was born and reminded me of the interactions and moments that shaped my first days of motherhood.

Before I dive in, let’s do a brief review.  As I established in The Birth of a Mama (Part 1), I was – without a doubt – a hot New Mama mess when I gave birth to Dylan.  I clearly missed the memo about bringing fresh baked goods to the hospital to ensure a smooth stay.  Nor did I have the sense to affix false eyelashes, which was probably a good thing because that might have only served to amplify my Crazy.  After an all-nighter that included a c-section, preeclampsia meds, a gazillion blood pressure checks, feedings, and diaper changes (my first diaper changes ever), I was the epitome of an overwhelmed, scared, confused, exhausted, and impressionable first-time Mama desperately seeking wisdom, best practices…and Percocet.

In no special order (because they all sucked), here are my most memorable hospital moments:

1. Immediately after Dylan was born, I was told that I couldn’t breastfeed for the first twenty-four hours because the preeclampsia medication, Magnesium sulfate, would seep into the milk and harm the baby.  A case of Enfamil was left by my bedside.

Unfortunately, this was false information (and long before I had a smart phone with wireless Internet access and a good reason why a doula might’ve been helpful).  According to the Academy of Pediatrics, even though Magnesium sulfate is excreted into human milk, adverse effects are unlikely and breastfeeding is considered safe.  How could I have known?

2. To make sure my future milk flow wasn’t put at risk during the delay, the nurses brought me a breast pump.  My first attempt yielded red fluid.  When I asked the nurse for help, she looked at me like I’d just vomited on her shoes and said, “That’s blood.”  She quickly fled the room but not before reminding me to wash the pump parts with soap and water (lest I infect anyone with my disgustingness).

I had what is known as Rusty Pipe Syndrome, which typically occurs immediately postpartum and most often with first time mothers.  It’s due to a vascular engorgement and usually clears up within a week.  This milk is perfectly safe for babies to ingest.  I asked for a consultation with the hospital’s lactation consultant, but she was unavailable.  Several phone calls later, I had a conversation with a wonderful lactation consultant from the community who cleared up (no pun intended) my breast milk debacle.

3. Toward the end of my second day in the hospital, a nurse came to my room and told me that my emotional state was concerning and abnormal.  Therefore, she arranged to have a hospital social worker evaluate me.

I had just finished screaming at Mike on the phone because I’d forgotten to pack my brush, but still, was it necessary to call me abnormal?  To suggest that I wasn’t acting the way a normal mother should?  To make me feel responsible for the train wreck my birth experience had become?  To be clear, an average of 15% of women suffer from post partum mood disorders.  It can happen to anyone, and believe me, I’m no stranger to anxiety and depression.  To this day, I’m not sure what to make of that particular interaction, but it was in that moment that I realized I needed to take my baby home.   I begged my OB/GYN to discharge me from the hospital the next morning, and she obliged.

Here’s the thing.  Bad hospital stays happen to good Mamas all the time.  And some Mamas deliver babies in the back of taxis or on the side of the road (although I’m pretty sure that only happens on television).  In any case, after I brought Dylan home, I found my mojo, breastfed successfully, and have been using my instinct as my parenting compass (mostly successfully) for almost six years.

Psst…I even went back to the same hospital to give birth to Riley.

What did I do differently the second time around?  Everything.  My plan was simple: Let my amazing OB/GYN deliver my son and then rely on the hospital staff for absolutely nothing…except Percocet.  This c-section was scheduled, so I knew exactly what to expect (yeah right).  Still, I brought my own stool softener and high fiber snacks (we all know Mamas can’t go home until they poop), my own breast pump, and the will and determination to get out of there in 48 hours.

Where I screwed up was sending Mike home each night to be with Dylan, who we worried about like crazy because change and transitions were so hard for him (this was long before his sensory diagnosis).  I ended up taking care of Riley on my own for two long nights with a fresh c-section incision, and let me be honest, that was a huge mistake.  Even though I wasn’t a new Mama, I would’ve been much better off with Mike – or someone – by my side.

On the second night, after feeding, rocking, and soothing Riley at least a dozen (or perhaps a thousand) times, he just wouldn’t stop crying.  As if I didn’t feel bad enough (emotionally and physically), when the nurse finally came to my room, she said, “What’s going on in here,” and then she offered to take Riley away for a few hours.  The thing that really stung about this moment was that even though I hated how it made me feel, I was grateful for the break.  The next morning, I pooped (thank you Colace and Kashi), packed, and took my second baby home.

If I had a third chance at a birth (and I won’t), I’d probably get the balance of reliance and independence just right.  Maybe.  The truth, though, is that there are well meaning people everywhere – friends, family, teachers, coaches, doctors, therapists, and judgy jerks at the grocery store to name a few – who will undermine your choices at every age and stage of your kids’ lives.  They mean well, but their bites throb, their strikes leave a mark, and their words hurt.  Just remember this: none of them knows better than you how to be a good parent.  All you can do is trust your gut, watch your back, and sleep with one eye open, which I’m pretty sure all Mamas do anyway.

How was your birth experience?  Do you ever feel undermined?