No Means No. Except When It Doesn’t.

No means no is a pretty good rule to live by.  Except when you’re a parent.  Then, the meaning of no is way more complicated.

I’m so honored to be a new contributing writer at Mamalode.com and to share with you my first post chosen for publication, “The Meaning of No.”

Okay guys.  I stink at asking for favors, but here’s what I need you to do:

Read it.  Even if you read the original version of this essay on my blog, click through and read it again.  The more people who click through to Mamalode.com, the more street cred I’ll gain for future writing gigs.

Like it.  Retweet it.  Favorite it.  Go crazy with it on social media.

Comment on it on Mamalode.com.  I promise I’ll respond!  Think about all the freakin’ times you’ve said no to your kids and immediately wished you hadn’t.  I’ve already said no this morning at least a dozen times for no good reason at all!

Last but not least, SHARE IT!  Send the link to every Mama you know who has struggled with the word “no,” which I bet is all of them!

I’m a Grateful Mama for your support!

Each week, my seven-year-old son brings home six vocabulary words.  Every Monday night, his homework assignment is to write out each definition and draw a picture that exemplifies the word in a special “vocabulary book.”

One of his words last week was persevere. 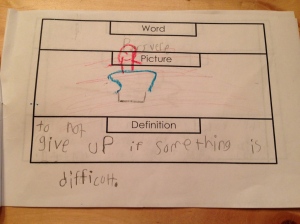 “to not give up if something is difficult”

“What did you draw for persevere?” I asked him. (This boy of mine with the beautiful mind isn’t likely be the next Vincent van Gogh.)

“That’s me with my ice skates on because hockey is difficult for me,” he said.

After I caught my breath, I told him it was the best, most perfect picture he’d ever drawn for a vocabulary word ever.

Here’s the thing about my son and sports. He likes – no, loves – sports and he’s always a good – no, great – sport, but the truth is that he isn’t very good at sports.

I don’t care if my kids like or excel in sports.  They can be professional athletes or musicians or computer programmers or archeologists or meteorologists or whatever the heck they want as long as they’re happy and healthy.  I’m incredibly proud of everything they do (except when they pee on the floor next to the toilet), and I’m even more proud when they challenge themselves to do new things, especially hard things. Believe me, watching them try their hardest is way more fulfilling than watching them win.  But how do you know if and when to encourage or discourage one activity over another?  For some kids, passion and talent surfaces at a young age (Tiger Woods began swinging a golf club before he turned two!), but for a lot of kids, it doesn’t.

Sensory processing disorder (SPD) made it difficult for my son to develop a foundation of athletic skills at a young age.  As a toddler, it was nearly impossible for him to focus or follow directions.  On top of that, he had balance issues, weak fine motor skills, no sense of right and left, and no idea where his body was in space.  No wonder T-ball was so damn hard!  And let’s not even talk about the basketball class where he had to wear a mouth guard, which was nearly impossible because of his over-sensitive gag reflex, and play in a busy gymnasium with several terrifyingly loud buzzers that went off often and unexpectedly.  It was a sensory nightmare, and he spent most of every game in my lap.

Post-SPD diagnosis and therapies, we dabbled in some independent sports, like swimming, tennis, and golf.  With each one, he showed some modest potential, but none lit a fire in him.  Now, with basketball and soccer, both of which he enjoys playing, he “get’s it” and participates more, but energy, confidence, and focus (or the “chasing butterflies syndrome” as we affectionately call it) are still issues that inhibit him from reaching a higher level of team play.

And then we went to Massachusetts.

On a trip to visit family last summer, my son watched in awe as his older cousin ice-skated in full hockey gear at a local ice-skating rink.  He was hooked instantly, and I’d never seen him so determined to succeed.

The irony of his sudden and intense desire to learn how to ice skate (just like his cousin) was that there was a time when the sensory overstimulation of an ice skating rink was his kryptonite.

He started lessons at a local rink as soon as we returned home, and by January of this year, he “graduated” to Ice Hockey 101.  Now, every Saturday afternoon, he dresses in full gear – padded pants and socks, shoulder, elbow, and shin pads, padded gloves, socks, a helmet, ice skates, and a hockey stick (and this is a kid whose tactile processing deficits once made it impossible for him to wear pants!) – and leaves his heart out on the ice.  Is he the best  player in the class?  Not by a long shot.  But he holds his own.  He skates and stops and jumps and dives and hustles and listens and follows directions and works as hard as everyone else, and there’s no question that it’s as fun for him to do as it is for us to watch.

In a culture where kids (and parents) get serious about sports before they can tie their own shoes, I’m a Grateful Mama that although my son may not be naturally athletic, he has what every athlete needs (but not every one of them has) to succeed in sports and in life.  He has courage, resolve, and buckets loads of perseverance.