Every morning when I drive my 6th grader to school, the sun is in just the right spot in the sky to blind us. It’s irritating, but it’s also beautiful. The sun singes the edges of the clouds with an orange glow, and the sky is fifteen different shades of blue. It’s a daily gift and a breathtaking reminder to see the forest from the trees, and I often find myself saying to my son, “Look up.”

I saw Harry, too. I see him in the moon and the stars, in rainbows, and in sunsets, and I definitely saw him in this morning’s exquisite morning sky. What Dylan didn’t know was that today is the anniversary of the day we said goodbye to our sweet Harry.

“Do you know today is the anniversary of the day Harry died?” I asked as we pulled into the parking lot.

“Wait. Harry died the day after Halloween?” My son was five when Harry died. He was old enough to experience the grief and loss, but too young for the details—the day, the time, the sun in the sky—to stick.

“Yes. He died the morning after Halloween. And you saw him in the sky today, exactly five years later. Isn’t that cool? That’s why it’s so important to look up.”

He paused for a moment and then said, “Okay,” like a typical eleven year old kid who has to suffer the injustice of going to school the day after Halloween.

Today, he looked up. He paused. So did I. And I’m grateful. 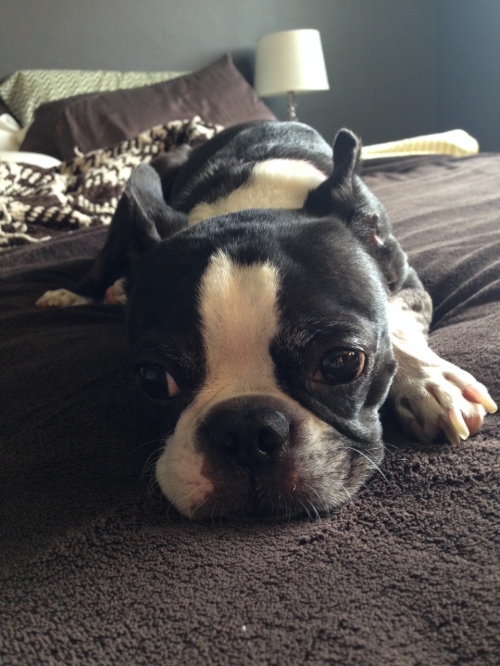 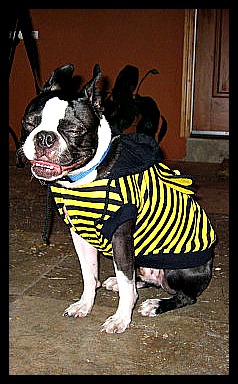 People either like costumes or they don’t. I fall squarely in the don’t column, although that wasn’t always the case. I enjoyed dressing up for Halloween when I was a little girl. I remember a few epic costume parties in high school and college. But somewhere in the space between being a kid and having kids, the allure of Halloween costumes faded away.

It was in that middle place that I had a molar pregnancy that resulted in cancer in my uterus and a lot of time to ponder if I would ever have children at all. It was easily the scariest thing that ever happened to me, and it sent me down a deep rabbit hole of fear, anxiety, and depression. Ultimately I healed, but not without a lot of time, therapy, and Harry the Bee.

Harry was the Boston terrier my husband and I got when we couldn’t have a baby. The Bee was the Halloween costume we bought for him on a whim at a chic pet store that sold uber-expensive canine clothing and accessories to people who didn’t have to worry about preschool tuition payments.

We also bought Harry a dry clean-only argyle sweater, but in our defense, we didn’t know about the washing instructions until it was covered in dirt. The sweater was undeniably an impractical purchase, but the bumblebee costume was worth every silly penny.

It’s true that parenthood gives you fresh eyes, which make things like Disney World, Christmas morning, the ice cream truck, and Halloween fun all over again.  Eventually, we had two healthy children, but until that future arrived, Harry was our baby and dressing him in a bumblebee costume for Halloween unearthed a sensation of joy inside of me that had long been dormant.

Harry saved me when I needed to be saved and made me feel safe in a world that without warning had become insecure. For eight Halloweens and through all of the ups, downs, ins, and outs of marriage and motherhood, Harry was my anchor.  Year after year, he and his black and yellow stripes and bumblebee wings reminded me that everything would be okay.

Last year, on Harry’s ninth Halloween, he was too weak to wear his bee costume.  He had insulinoma, a cancer in his pancreas, and despite our best efforts and interventions, we couldn’t save him. October 31st was, in fact, Harry’s last day here on Earth. We whispered our goodbyes all throughout the night and held him close the next morning when he was finally released from his pain and suffering.

In the days that followed, we got rid of or donated most of our pet supplies, but not before letting the kids decorate and fill memory boxes with items, including photos, drawings, and squeaky toys, that they wanted to keep to remember their big (canine) brother. My husband also tucked away some sentimental items. A harness and a tag, I think. I kept something special, too. Harry’s bumblebee costume.

The irony isn’t lost on me that we lost our sweet Harry the Bee on Halloween.  A year later, I’m not sure I’m ready to celebrate this holiday without him, but if Harry’s life and death taught me anything, it’s that joy hides in the most unexpected places and almost always lies at the end of a deep rabbit hole.

~In loving memory of Harry the Bee~

This essay originally appeared on Mamalode.