Everything Is “Beachy” Keen! 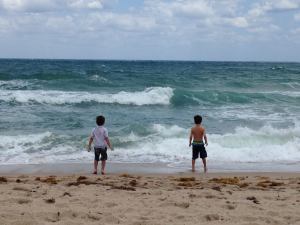 As soon as I posted it on my personal Facebook page, I thought to myself, Look at me posting perfection. How annoying.

It was a perfect moment, but it was just a snapshot. Shortly afterwards, Dylan had to pee. Badly. He wanted to spray a nearby palm tree, which led to an unexpected teachable moment about the illegality of public urination. I would’ve sent him straight into the water to do his business, but it was a windy day and the water was rough. The lifeguard towers posted red flags, which meant the waves were huge and the rip current was strong, and the boys were only allowed to splash at the water’s edge. In the end, I held on tight to his hand, and we braved the surf together so he could relieve himself without getting arrested.

Overall, we had a really nice day. After the beach, we walked back to my in-laws condo and swam in their pool, ate their food, and, as usual, spilled apple juice all over their floor. In the late afternoon we headed home for dinner, a bath, and bed.

“Two more sleeps after tonight until you see Daddy,” I told the boys (and Gertie) at bedtime.

Mike’s been out of town since Mother’s Day. He’s been gone for nine nights, or two trash days (how I tend to mark his absences), and we’re finally in the home stretch. I’m getting pretty good at managing the kids when he’s away. I didn’t even cry when I spent five consecutive hours at the ice skating rink on Saturday for Dylan’s hockey clinic, Riley’s skating lesson, and a free skate (and a soft pretzel and a bucket of popcorn and several bathroom runs) in between. I’ve kept the kids busy, happy, fed, clean, rested, and healthy, no one has missed a day of school, and I haven’t been on a single shopaholic binge! But still, my tank is nearing empty, and while I’ve kept up with the kids nicely, the home front has suffered.

The day Mike left, our washing machine sprung a leak. (Happy Mother’s Day!) Also that day, my laptop lost its connection to the printer, which was unfortunate because (1) I’m a writer and (b) I don’t know how to fix it.

In fact, I don’t know how to fix a lot of things. Over the last ten days, I’ve counted at least five light bulbs that need to be changed. I should specify here that I do know how to change a light bulb. There’s no need for any “How many Mamas does it take to change a light bulb?” jokes. I just don’t know where the extra light bulbs are located. My gut tells me they’re in the garage, but currently there’s a TLC camera crew in there filming an episode of “Hoarding: Buried Alive,” and I dare not interrupt. By the time Mike arrives home, we’ll be surviving on the flames of citronella candles.

Speaking of light, the fuse that powers the kitchen and dining room lights has blown at least five times. I have no idea why it’s happening or how the hell to fix it, but kudos to me because at least I know how to reset the fuse.

I already mentioned this, but it bears repeating. I’ve taken the trash out twice. Believe it or not, I’d rather fold laundry than haul garbage to the curb. In other “home ownership sucks” news, the pool pump is making a weird slurping noise, and the refrigerator doors aren’t sealing properly. I know this because if the doors are left open too long, it beeps…and beeps and beeps and beeps. Now, no matter how firmly I close the doors, it beeps. I hear it. I do. I really do. I keep trying to close the doors super tight. Sometimes I succeed, but sometimes I don’t, and I’m getting frustrated because I have no idea where the “stop fucking beeping at me” button is, and it just keeps beeping and I want to hit it with a baseball bat, but I can’t. It keeps Kefir and cheese sticks cold, and I can’t mess with that.

Finally, I’ve developed a mild case of pinkeye, for which I’ve been pilfering the kids’ old, expired stash of eye drops. This is par for the course. Like a body that rejects a new organ, my body always eventually rejects single motherhood. Of course, now that I’ve made this nugget of contagious information public, the kids will surely wake up pink-eyed tomorrow.

Yup, everything is “beachy” keen here! If there’s a silver lining in this latest installment of “My Husband Is In London…Again,” it’s that: (1) I want (and need) to learn to be more handy around the house. That, or I need to hire a staff. (2) Absence does make the heart grow fonder. I really, truly miss my appliance repairman IT guy handyman, electrician “stop fucking beeping at me” button finder husband. (3) Fleeting moments of perfection are a good thing. They’re real and lovely and peaceful and healing…until someone has to pee in a rip current. 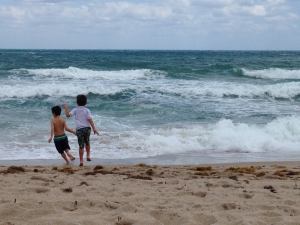 Day fourteen was the day I cracked.

Various friends asked, “How are you holding up?”

Except that wasn’t true either, because I felt like crying all day, and dead people don’t cry.

They don’t bark either.  I started barking at Gertie because she started biting me.  She bit.  I barked.  She started it.  Perhaps it was puppy antics, or maybe she disliked me.  My parenting skills had been on a steep decline since approximately day twelve.

A few years ago, when we had some behavioral issues with Harry, a dog trainer told us to bark at him to get him to submit to us as the pack leaders.   So, on day fourteen, I started barking.  Whatever the neighbors thought before had escalated for sure.

Did I mention Netflix stopped working?  I don’t know how to fix it, so Crash & Bernstein and Clifford Puppy Days would have to wait, which wasn’t a big deal to me, but there are two small humans in the house for whom that news was far more traumatic.

We all died a little bit inside on day fourteen.

Early in the day, I saw a new endocrinologist who wondered in an accusatory tone why I had a thyroid biopsy the year prior.  “The nodule was concerning to my previous doctor,” I told him.  He didn’t understand why a biopsy was done on a nodule so small, and he wanted some kind of explanation from me, which was awkward since I’m not a doctor, and then he told me my thyroid was lumpy.

After that, I spent a hundred dollars on treats and toys for Gertie at Petco, who likes to bite me, which offered up no shopaholic satisfaction at all.

I’m bitching and moaning (and barking) about being alone with my kids and a (biting) puppy as if I’m a Single Mama.  I’m not.  I know that.  My husband has been away for a few weeks.  I’ve taken out the trash a few times.   Big deal.  I’m no Jared Leto’s Mama.  But I am tired.  I’m exhausted and I think Single Mamas are heroes and I want my family to be whole again, so I can run far, far away because it’s Daddy’s turn to bark (and fix Netflix).

Did I mention we had Dylan’s first evening ice hockey practice on day fourteen and how I had to schlep Riley with me because what else was I supposed to do?  I remember chatting with a neighbor a few years ago about how her daughters, who were a few years older than my boys, had soccer practice twice per week at 6 and 7pm consecutively and how they had to take showers and eat dinner and do homework afterwards, and I remember thinking as I stood there with my four-ish-year-old who still napped and my two-ish-year-old who still pooped in diapers, When does this poor woman drink her wine?

Since Netflix was out, I had my wine while the boys watched an On Demand episode of Uncle Grandpa before bed.  Never before had that horrific cartoon shown any value, and never before had a glass of Chardonnay tasted so good.

One might say day fourteen ended on a high note.

That was yesterday.  Today is day fifteen, and there are ants in the bathroom.  After today, there are two more days to go, but who’s counting?  (Me.)

Does your spouse/partner travel for business?