I’m known as the clear-cutter in my family.  Catch me in the right (bad) mood and I’ll throw anything and everything out in my path.  Even small children.

This is how I felt when I woke up on Sunday morning.  In my defense, my house needs to be de-cluttered.  Really badly.  It’s not quite like an episode of “Hoarders,” but there’s definitely too much stuff.  Does any household need six kids lunch boxes, seven Dora the Explorer DVDs, eight Thomas the Train DVDs (dear God!), and a dozen pairs of maternity jeans?  I think not.  By the end of the day on Sunday, I filled five garbage bags, created a small mountain of junk to go straight to bulk-trash or Goodwill, and dreamed up a crazy idea about what to do with the rest…have a yard sale.

I’m currently knee shoulder forehead deep in yard sale planning, and even though I’m a little bit nervous, I’m also beyond excited about doing this.  It might just make my Runaway Mama bucket list.  I won’t bore you with the details on the yard sale…yet.  That will probably come later in the week, perhaps in the form of a list called: “Top Ten Reasons Yard Sales Rock!” (Or, if Mike has his way: “Top Ten Reasons Why Yard Sales Suck!”)  We’ll see.

Stuff makes me anxious.  (Obviously.)  I want to live with less, but I’m not heartless.  In fact, I found several items on my Sunday rampage that made me pause, including:

1. An envelope filled with everything that was pinned in my cubicle when I worked at PT&Co. (now CRT/Tanaka), a public relations agency in New York City. 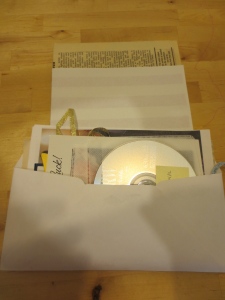 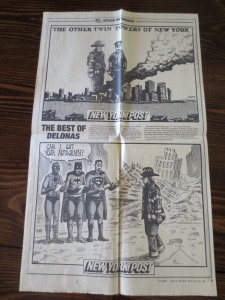 I’ll never throw this stuff out.

He’s in the back of the car in this picture because I had just almost accidentally given him away.  Gulp.  When I was a kid, Freddy was “my person.”  Yes, Freddy is a donkey.  No, I have no idea why I chose a stuffed donkey as “my person.”  I just know that Freddy’s been mine for as long as I can remember.  My Freddy is like Andy’s Woody.  Don’t get weirded out.  It’s not like I sleep with him, but he’s in the house.  Dylan and Riley never cared much for him (“A donkey, Mommy?”), but his presence has always been felt (by me, anyway).

On Monday afternoon, I drove all the way to the Goodwill truck before I realized Freddy was at the bottom of a bag filled with random stuffed bears.  Poor guy.  That car ride probably made him feel more like Jessie than Woody.  I almost gave him away!  But, unlike that cold-hearted snake of a tween in “Toy Story 2,” I didn’t.  Have I gone to far with the “Toy Story” references?

The bottom line is that I can be sentimental.  But, I’m still having a big-ass yard sale (just like in “Toy Story 2”!), and it’s going to be epic.  Plus, the boys are totally onboard to sell some of their junk (to make room for new junk, of course), and 50% of the profits will go directly to the American Red Cross to help victims of Sandy.  (The other 50% will be spent on stuff that I’ll eventually want to throw away.)

Ironically, preparing for a yard sale requires some shopping, which, as you know, is right up my alley.  Stay tuned…

Do you still have a stuffed animal or toy from your childhood?  Have you ever had a yard sale?