I read a memoir a while back called The Middle Place by Kelly Corrigan.  It’s about a mother of two young daughters who discovers she has breast cancer around the same time her father discovers he has bladder cancer.  It’s about her experience of being both a parent and a child during a medical crisis.  It’s about being in the middle place.

Something happened this week that made me think of this book (excellent, by the way), and it’s probably not what you think.  First, I don’t have breast cancer…or thyroid cancer (not yet, anyway).  Second, my parents are healthy.  They’re doing quite well, actually.  Mike’s parents are fine, too.  What made me think about the book was Harry. 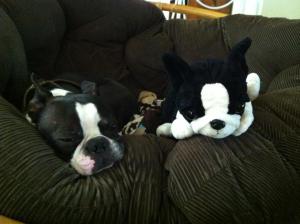 The real Harry is on the left.

Tuesday night was a long, rough night.  At about 12:30am, Harry popped out of bed and couldn’t sit still.  For hours, he moved from one spot to another from room to room over and over again grimacing in discomfort.  Something was very wrong.  We rushed him to the vet at 7:30 the next morning only to discover from an x-ray of his stomach and back that he had a degenerated disc and possibly a pinched nerve in his Thoracic, or middle, spine.

Editor’s note:  The x-ray also showed that Harry had a lot of poop in his belly.  According to the vet, the back pain was most likely making it hard for him to do his business.  In an effort to keep things light, the vet said to me with a snicker, “Your dog is full of shit.”  Given the circumstances, he took a sizable risk with this zinger, but he was lucky.  If anyone can handle and appreciate a good poop joke, it’s me.

The disc degeneration is age (and gravity) related and there’s nothing we can do except treat the current inflammation with a non-steroid anti-inflammatory medication and Valium (lucky duck dog!), let him rest, and keep an eye on him.

Not a problem.  I can’t take my eyes off of him!  The love, gratitude, and sympathy I feel for this dog is, quite frankly, more than I can handle.  Somehow my puppy has turned eight, and while he’ll always feel like my baby, he’s transforming into something akin to an aging parent.  I’m smack in the middle of his life cycle, and I feel dizzy.

If it seems like I’m obsessed with death and aging – and I might be – it’s not all my fault.  It’s not just that Dylan no longer wears clothing in sizes that end in “T” or that Riley now sleeps on the top bunk.   Did you see New Kids On The Block on “The Today Show” earlier this week?  They looked, well, old.  (By the way, 98 Degrees was on the show yesterday and they seem to be fairing much better.)  Do you know old Brad Pitt is?  Forty-nine.  Forty-nine.   Wasn’t he just in “Thelma and Louise”?  Oh wait, that was twenty-two years ago!

My mother has never liked her birthday. For years I didn’t understand her birthday malaise.  Now I do.   Then, I was young.  Now, I’m a couple of seasons of “The Voice” away from forty, and my puppy has an ailment that starts with the word “degenerative.”

What’s a girl Runaway Mama to do?  I could pilfer some of Harry’s Valium (I would never), but instead I’m going to do everything I can to ensure that he ages with grace and dignity, and I’m going to take him on a long walk, in the middle of which I hope he has a big, glorious (and graceful and dignified) poop.

Do you have pets?