In the interest of full disclosure, I was given free tickets to the Ringling Bros. and Barnum & Bailey circus in exchange for (1) doing a ticket giveaway and (2) writing about the show.   It goes without saying that I’m an Honest Mama regardless of the perks.

We took the kids to the circus on Friday night.  It was a surprise.  We’d never surprised them like that before, so we felt like pretty stellar parents (I did, anyway).  I mean, it wasn’t a “Hey, kids, we’re going to Disney World!  Right now!  Get in the car!” kind of a surprise, but they’d never been to the circus before, so I was eager to see their astonished faces when we let the cat out of the bag.

All day long, I imagined the shocked, jaw-dropped looks they’d have on their faces when we told them.  It was torture waiting until the end of the day, just before we had to leave.  When we finally did the big reveal, I had my camera ready to capture the epic moment.

“Kids, guess what?  Daddy and I are taking you…to…THE CIRCUS! 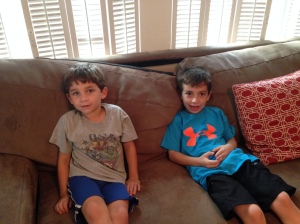 Epic probably isn’t the best word to describe their reaction.  In fact, they acted like I told them we were going to the doctor for shots, but in their defense, it was Friday evening and they were tired (both of them fell asleep in the car on the way there).  They really were excited, especially after the nap, but the surprise certainly didn’t unfold they way I’d seen it happen on television.  Go figure.

During the drive (and before the nap), Dylan kept saying, “I’ve always wanted to go on the circus.”

“Is it on your bucket list?” I asked him.

“A bucket list is a list of things you want to do before you die,” I said, and because I did NOT want to start a conversation about death, I added, “which will be a very, very, very long time from now.”

“Jump out of an airplane?” I asked.

“Yes, that’s what you do when you turn twenty,” he said.  Of course.

“I want to go fishing on a fishing boat…and catch fish…with eyes.”  Of course.

Then, they both fell asleep.

The first thing we saw when we arrived at the arena where were protesters.  One of them handed me this flyer.

I don’t mean to be a circus party pooper, but the treatment of the animals, especially the tigers and elephants, weighed heavy on my mind.

Before the show, we visited the “Animal Open House” where we saw and learned about the circus animals. 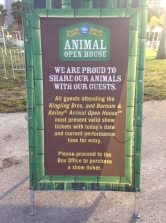 As we walked around, a voice from a loud speaker spewed a bunch of information on a loop about how Ringling Bros. cares for, feeds, and trains the animals.  It felt like one big public relations effort to demonstrate how good they are to their animals.  (I’m not saying they’re not.  I’m just saying it felt a little bit like one of those BP-sponsored television commercials on the clean-up and restoration of the Gulf after a few hundred million gallons of their oil spilled in the ocean.) 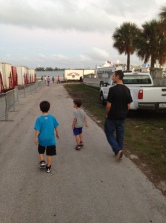 At the open house, we met a miniature horse name Gunther…

…caught a small glimpse (and a big whiff!) of the elephants… 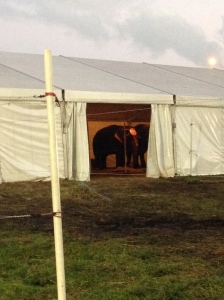 …and got up close and personal with the tigers, whose living quarters seemed a little bit tight (just sayin’). 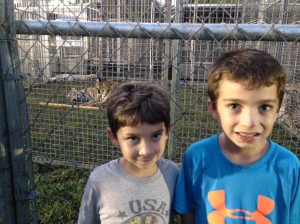 Once inside, we checked out the “All Access Pre-Show” on the arena floor.

There were costumes to try on, clowns and dancers performing, and there was even a bounce house to play in.  We didn’t stay on the floor long because the boys were more interested in getting their hands on popcorn and cotton candy than anything else, but we did get one shot with a clown (Riley was afraid to get in the picture). 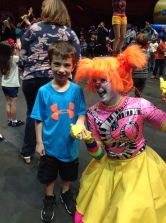 After quickly spending a gazillion dollars on drinks, food, and light up circus crap toys… 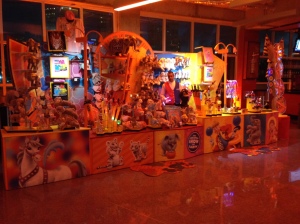 …we found our seats and waited for the show to start.

The show itself was a lot of fun.  The clowns, performers, dancers, acrobats, stunts, lights, sets, costumes, and music were a feast for the senses.  Afterwards, we talked about our favorite acts, and interestingly, no one picked the tiger or elephant acts.  Personally, I found tricks the tigers performed – rolling over, walking backwards on their hind legs, and hopping – uncomfortable to watch.  Looking at the elephants roll over and do handstands was equally awkward.  It’s just not what these majestic (and endangered) animals were put on Earth to do, and it made me kind of sad.

The debate over animal cruelty in the circus is a doozy, and I don’t want to get too wrapped up in it because I haven’t done nearly enough research to have a thoughtful discussion on the issue.  All I have is my instinct, and my gut tells me the next circus we attend will be animal free.  That said – and call me a hypocrite if you must – there was one animal act that I really loved, and I’m not referring to my kids.  No, I’m talking about the poodles.  The poodle act was without a doubt my most favorite act in the show.  It was surprising, funny, fun, and freakin’ adorable.  (And, by the way, I want a poodle.)

Bottom line: Thumbs up from the Runaway Mama and her brood.  The animal issue aside, it was an entertaining show (and a valuable learning experience), a nice way to spend quality time as a family, the boys L-O-V-E-D it, and, let’s face it, everyone should see a human cannon ball at least once in their lifetime.

Ringling Bros. and Barnum & Bailey Presents Built To Amaze! is at the American Airlines Arena in Miami through January 20th.  The arena wasn’t full when we went, so I’m sure there are plenty of tickets available.  For long distance readers, go to www.ringling.com to find a show near you.

On to the next big top!  The house is being tented for termites this week.  The only cruelty I foresee is the pain and suffering I’ll endure cleaning out and packing up the house and living in a hotel with my two circus animals.  And just like that, Dylan can check off another adventure on his bucket list.

Speaking of which, please email me at therunawaymama (at) gmail (dot) com if you’re looking for mom bloggers to review family-friendly cruises.  The entire family would be thrilled to offer our services!