On Sunday evening, Mike and I took the boys to Chili’s to eat dinner and watch USA play Portugal in the World Cup. Upon being seated, we discovered that Chili’s has tablets on each table that can be used to order drinks, pay the bill, and play games. For a mere 99 cents, the kids could play unlimited games while we ate, and I thought it was awesome because it meant we had a fighting chance of lasting more than 30 minutes before the kids expired and/or Riley announced that he had to poop…badly. I was so excited that I posted this snapshot on my social media accounts. 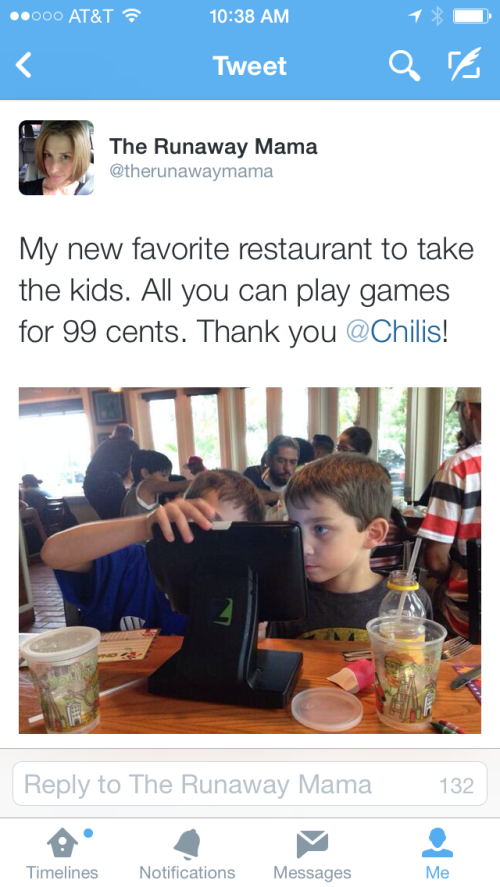 “Such a shame when I think that dinner is a good time to talk to your kids and have great conversations.”

Believe it not, I’m relatively new at receiving and responding (or not responding) to negative comments on the blog and/or social media. (Just to clarify, negative comments and rejection are two different things.   I’ve received plenty of the latter.) I’ve been writing as The Runaway Mama for nearly four years, and this was just one of two off-putting comments I’ve ever received about my writing or my social media presence. The other – a doozy – came a few weeks ago about my Mother’s Day post from a person who wrote: “what a self-absorbed bitch.”

Dylan is really funny in that he can watch an explosive, large-scale, and violent scene in super hero movie like “Man of Steel” and be totally and completely fine, but he is forever scarred from watching “The Lion King,” “E.T.,” “Finding Nemo,” and the scene in “Toy Story 3” where Lotso tells the story of how he and Big Baby were lost and replaced by their owner. One is too big and shocking to absorb, and the others tug at where he’s most vulnerable…his heart.

Similarly, the “self-absorbed bitch” comment was so crazy hateful that it meant far less to me than the passive aggressive words of disapproval about my parenting (ouch). The thing about our Sunday night dinner at Chili’s, though, is that so much else happened outside of the snapshot of the boys playing on the tablet.

Mike and I stole some quiet time to talk, reminisce, and laugh without interruption. We felt connected and happy, and that doesn’t happen often enough these days!

We talked about healthy eating with the kids. Mike insisted that the boys try the guacamole because avocados are tasty and full of protein and “good” fat. They refused (of course), which prompted a friendly debate over whether or not an avocado is a fruit or a nut (it’s a fruit, by the way).

We celebrated futball! When USA scored their first goal, Mike and I laughed (again!) because we both missed seeing it live due to intense guacamole negotiations.

We had a sensory victory! Dylan ate a french fry (a french fry!), which made me explode with pride. If you’re more than a first-time or one-time reader, you know that Dylan has a limited diet due to sensory processing disorder, so trying any new food, wherever it falls on the healthy eating spectrum and even if it’s a fatty, greasy french fry, is a very good thing!

We explored concepts in math and money. For every three bites of macaroni & cheese Riley ate, I gave him one dollar. For every one dollar he paid me, I gave him a handful of tortilla chips that were leftover from the guacamole, which he eventually did taste and immediately declared, “I don’t like it.” In then end, he ate a pretty good dinner and went home with two dollars in his pocket.

We had a bathroom adventure (of course). Riley inevitably announced that he had to go to the bathroom. He promised he just had to pee, so we let him and Dylan go together. Mike checked on them a few minutes later and discovered Riley in a stall with the door locked saying he couldn’t get out. Dylan was going to crawl under the door to free him and said to Mike, “Don’t tell Mommy,” because he knew I’d be upset that he touched the floor (my valiant son!). In the end, Mike talked Riley into unlocking the door on his own, and they all returned to the table with a bath in their future and great story to tell.

We experienced the thrill of victory and the agony of defeat (or the draw). Dylan was standing next to me when USA made their second goal. It was amazing! We hugged and cheered and yelled “GOOOOOOAAAALLLL!” along with every other crazy, screaming person in the restaurant, and I’ll never forget that special moment. Soon after, we watched stunned as Portugal scored in the last seconds of the game. Boo.

Chili’s is my new favorite restaurant to take the kids, and the snapshot I shared on social media was just that – a snapshot that was a part of a much larger story about a family sharing a meal together at a local bar and grill.

One of the most important lessons that being a parent has taught me is to resist the urge to misinterpret or judge others (and myself!) because the journey is long, surprises await every turn, and I’m doing the very best I can from one moment to the next all the while hoping they add up to something authentic and honest in the end. I like to think most parents would agree with me on this. Regardless, I still look forward to your comments (gulp).

3 responses to “The Snapshot”