We took the kids to dinner with my in-laws on Sunday.  Mike drove.  Instead of taking the highway, we took the side streets because we thought it would be faster.  (It wasn’t.)  He asked me to look up directions, but we didn’t need to because I knew where we were going. I said, “Go straight all the way to US1 and then go right.”

“You always know exactly which lane to be in,” he said.

“No,” I said defensively for no good reason, “I just know that when we get to US1, we’ll go right.  Then we’ll go left on 17th Street.  You can drive in any lane you want.  Just go straight.”

“Okay, fine.  But you would stay in the same lane all the way there.  Even if the turn was six miles ahead, you’d get in the lane you needed to be in and stay there the whole way.”

“Well, I have a good sense of direction.”

“It’s more than that,” he said.  “You know exactly how you want to get there and you don’t veer from your lane.”

At this point I’m paraphrasing, but that was the gist of the conversation. He was right.  I’m precise about the lanes in which I drive.  Driving in my lane keeps me calm.  It keeps me sane.  If I stay in my lane, I won’t miss my exit.  I won’t be late.  I won’t get lost. I won’t have to troubleshoot. I get in my lane because I’m particular, punctual, and predictable, and I don’t like surprises, which is funny because motherhood, which takes up most all of my time, is none of those “P” words and always full of surprises.

Like on Saturday morning when I woke up to the soothing sound of, “MOMMY! I POOPED IN MY PANTS!” Upon finding actual poop in actual pants, I discovered pee all over the floor around the toilet, which no one would admit to producing.  Fast forward a few hours and we were back in the same spot where one of the plastic knobs that covers the screws on the floor on either side of the toilet was somehow resting at the bottom of the pee-filled toilet, and no one – absolutely no one – had a clue how it got there.

To steal a song title from Pink, motherhood is chaos and piss, and the bedlam doesn’t just happen in the bathroom (although it happens there a lot).  The older one couldn’t pull off a real magic trick to save his life, but he makes things disappear – books, cards, homework, Legos, etc. – with the ease and wonder of David Blaine.  The younger one doesn’t do much magic (thank heavens), but he is puzzling.  He puts his sneakers in the laundry basket with his clothes, which explains why we have a hard time finding shoes when we need them, he stains his hands and arms with magic marker within minutes of emerging from the bath, and he excels at needing to go to the bathroom “really, really badly” exactly when dinner is served, a practice/class/anything important is about to begin, or frozen ice cream is placed in the shopping cart.  (Back to the bathroom we go!)

They’re both loud and messy, their hands are always sticky, they prefer to eat with their fingers instead of utensils, they have no idea how to coordinate clothing or keep shirts folded in a drawer, they finish every knock knock joke with, “Do you get it?” (for the record, NO), and for reasons unclear, they think I like to hold trash.  They face every which way but forward when I’m putting on or tying anything, including, but not limited to, shin guards, elbow pads, shoulder pads, ice skates, soccer cleats, and sunscreen, and they insist on getting into the backseat of the car through either the front seat or the trunk.

Speaking of the car, just getting into the vehicle inevitably involves running laps around the driveway, and/or stomping on ant mounds, and/or playing hide-and-seek when we’re already running late.  Once inside, they yell, demand food and beverages, kick the back of my seat while asking, “Can you feel that?” (for the record, YES), and open their windows, which hurts my ears for some reason.

Lately, they insist on listening to Eminem’s “Lose Yourself” on repeat in the car, which I blame squarely on Daddy.  I’ve tried using the lyrics – You only get one shot, Do not miss your chance to blow, This opportunity comes once in a lifetime – as inspiration for hockey games, soccer practices, and spelling tests, but, regrettably, the main takeaway from the song, at least for the older one, is the misread permission to say “motherfucking” as in “success is my only motherfucking option,” which I fear will slip out when it shouldn’t, like at school or in front of our pediatrician.

When I first held a baby many years ago, I was surprised to discover he squirmed around a lot. In fact, babies (and kids) are never still (or quiet).  Unless they’re asleep, which is why Mamas say they love their children the most when they’re sleeping.

“I don’t know how you do it,” my husband said to me in the car on the way to the restaurant while the kids whined, fought, and subjected us to poorly executed knock knock jokes on the eve of a week-long spring break. I didn’t know either, but I knew our turn was coming up so I said, “Get in the right lane.”

Spring break is over! Yay!

Dylan is back at school, but Riley, because of the Passover holiday, doesn’t go back until tomorrow. Bugger.

Just as I anticipated, it was a long week, and just as I predicted, I wanted to pull my hair out by bedtime on Thursday. All in all, though, it was an interesting week filled with dilemmas, adventures, anxiety (of course), firsts, and family.

Dylan bought new sneakers with laces. The “with laces” part is important. I vowed never to buy him (or Riley) sneakers with laces until he could tie his own shoes, but then he drooled over these really cool black Nike basketball sneakers and I couldn’t say no. (Never say never.) Now I’m desperate to teach him to tie his own shoes (so I don’t have to do it ten times a day), and let’s just say progress has been slow. This milestone – tying ones own shoes – feels like a big deal, and I feel as much pressure to get it done as I did when Dylan was almost three and a half and not yet potty trained. I can’t help but think about Lisa Belkin’s recent piece, “Parenting Memories: The Bubbles That Unite And Divide Us,” about how we get caught up in whatever stage of parenting we’re in (breastfeeding, potty training, applying for colleges, etc.) and then find it hard to relate to parents who are in a different place. My friends, I am in the “learning to tie shoes” bubble. (Help!)

We went to the zoo and the lion roared! It. Was. Amazing. It was the first time I ever heard a lion roar, and it’s going on my Runaway Mama Bucket List, for sure. It was a first for Dylan and Riley, too, although if you ask Dylan what his favorite part of the zoo was, he’ll say, “eating popcorn.”

I got the results of my thyroid biopsy. Don’t get too excited. There was no result. Really. It was non-diagnostic, which means the cell sample wasn’t large enough for the pathologist to make a determination. It’s neither good nor bad. It’s nothing. It’s like it never happened. I have to do the biopsy all over again, and I have to wait three weeks to do it so the thyroid can heal completely from the first procedure. This non-diagnostic result happens approximately 10% of the time, which made me want to scream into a pillow for a little while. I’m okay now, but the anxiety has propelled my spring cleaning energy to a dangerous level. I still haven’t started on my closet, but the laundry room looks great, I rearranged the kitchen, and we finally hung some framed pictures of the boys that I’ve been meaning to do since Christmas (and before they graduate high school). Next up: the patio, the toy closet, and the boys’ bedroom. [Insert dramatic music].

We had a very successful family dinner on Saturday night at the Macaroni Grill. Both kids behaved, ate the food they ordered, and only went to the bathroom once. So that’s what it’s like to go out to dinner with my children and not have an uncontrollable urge to hurl myself out a window!

We celebrated Easter on Sunday. I (a Jewish Mama, remember) hid candy and Squinkie filled eggs in the backyard, the boys ate excessive amounts of chocolate… 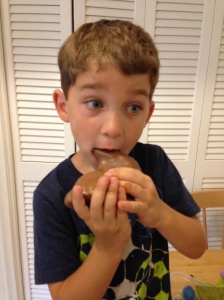 …and we had a lovely brunch with stimulating conversation about Plato and Socrates’ Allegory of the Cave, “The Croods” (major philosophical undertones!), and Jesus Christ, all of which made me wonder where the hell the Easter Bunny came from.

Last but not least, bedtime last night, after a week of staying up late and sleeping in, was, predictably, a bitch.

How was your spring break?