Upon Harry’s death, I vowed to never get another dog. To never again open my heart and be vulnerable to sadness, disappointment and loss. Then, I remembered that I’m a mother and my heart is wide open and vulnerable every minute of every day. With that aha-moment under my belt, we bravely welcomed Gertie into our home.

Even though training her – with two busy boys already reaping havoc all over the damn place – has occasionally often perpetually thrust me on the brink of insanity, adopting her was the smartest thing we’ve done as parents since we decided two kids was plenty.

Of course, there are pros and cons to having a puppy.  Annoyances like poopy paw prints on the floor, pee stains on the rug, nighttime wake-ups, chewed shoes, missing socks, and toilet paper dragged through the house come to mind easily. But the good stuff far outweighs the bad. Here are some of the awesome ways Gertie has rocked our family’s world.

Gertie’s presence has helped heal our broken hearts. She’s been a delightful, albeit messy, distraction from the sadness of our loss and a grateful trigger for the memories of Harry that we hold so close. We miss our Bo-Berry like crazy and always will, but through Gertie, we feel a connection to him that we never expected.

On afternoons when Dylan whines about homework, Riley begs me to sit with him in the bathroom, the phone is ringing, UPS is at the door with a package for which I need to sign, and I have a pot of macaroni boiling on the stove because everyone will be hungry any minute, it doesn’t seem possible to meet another being’s needs. But here’s the thing. It totally is. I’m handling all of the parenting madness plus I’m feeding, playing with, cleaning up after, and training a puppy. I’m stretched thin, but just like when Riley was born and I discovered I could simultaneously breastfeed one kid and flip a grilled cheese sandwich for the other, I have a renewed sense that I’m capable of way more than I think.

3. I Can Survive With Less Sleep

Before we brought Gertie home, I dreaded the nighttime wake-ups that would accompany her arrival. Memories of the sleep deprivation of early motherhood and the feeling of desperation that accompanied it washed over and left me chilled to the bone. The part I forgot is that over time your body adjusts and learns how to function on less sleep. That, and coffee technology has come a long way since Dylan was an infant. All hail the K-Cup! Thankfully, Gertie has handled nights way better than either of my boys ever did. I’m definitely tired, and I’ve dropped off the kids at school without their backpacks a few times (oops), but I’m persevering because, as with human babies, this too shall pass!

4. My Children Are Learning The True Meaning Of Love

My boys adore every soft, square inch of Gertie, and the tenderness they show her (except when they chase her with light sabers) makes me a very Proud Mama. But love is more than kisses and cuddles. It’s being responsible for another person’s (or pet’s) basic needs and, more importantly, putting those needs ahead of your own. In this age of overparenting, where our children are the center of our universe and demand our undivided attention all the time, my boys have quickly learned that sometimes Gertie comes first. What a concept for my 21st century kids!

It’s not only that they’ve learned to have patience and wait their turn, but also that they want to help. Whether it’s feeding, walking, bathing, or taking Gertie outside to pee or poop, they’re happy to lend a hand.   Dylan has become quite skilled in retrieving items from Gertie’s mouth that she’s not supposed to have, like shoes, socks, toilet paper, and field trip permission slips, and Riley has even attempted to scoop the poop in the yard. (Watch your step. Seriously.)

They take turns opening and closing her crate, race to the couch every morning to get the first snuggle of the day, and follow the new house rules, which include closing bathroom doors (Gertie has made us well aware of her fondness for toilet paper), keeping toys off the floor or in their rooms, and never letting chocolate, grapes, or raisins fall from a plate. They genuinely care about the well being of their “little sister” and it’s an absolute joy to watch. 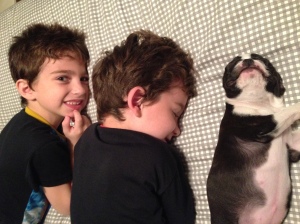 Fitting Gertie into our already chaotic schedule has forced me to slow down. To let go of what’s not important. Because of Gertie, I’ve learned to say the impossible. I’ve learned to say NO. Instead of over-committing myself to activities at the kids’ schools, running needless errands (i.e. shopping for shoes I that don’t need or, knowing me, already have), and fretting over unfinished projects (Riley’s baby book comes to mind…dear God, he just turned five), I’ve spent buckets of quiet and – believe it or not – relaxing time at home in my backyard. In fact, I wrote most of this essay sitting on the patio with a breeze blowing through my hair and a snoring puppy in my lap.

My “indoor” OnDemandNetflixBlue-rayXboxiPhoneiPad addicted zombies kids have dirt under their nails and mosquito bites up and down their legs from romping around outside with their new pup. Before Gertie, our swing set was covered in cobwebs. Now, the boys climb, swing, throw balls, toss Frisbees, and run around with Gertie until the sun goes down, and even then it’s hard to get them inside. My kids have turned into adventurous, tired, itchy, and filthy “outdoor” kids, and I couldn’t be happier! 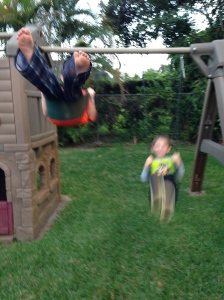 We promised the boys they could take turns sleeping with Gertie once she made it through the night reliably. About a week ago, we tossed her in Dylan’s bed, but as much as he adores her, he was immediately annoyed by the smell of her chew toy and her lack of awareness of personal space. (He is so my child!) Riley, however, took her in unconditionally. Here’s the part that will blow your mind. If Gertie sleeps in Riley’s bed, Riley actually goes to sleep. In other words, he doesn’t come out every five minutes to tell us he’s scared or thirsty or hungry or worried about what’s happening in Ukraine. He doesn’t insist on falling asleep on the couch. He doesn’t crawl into our bed in the middle of the night. He goes the #$%& to sleep, and it’s reason enough for every Mama in the world to get a puppy IMMEDIATELY!

Welcoming a dog into the family at any age or stage is a huge commitment and a crap load of responsibility. I’m in no way suggesting a puppy is a good fit for every family, but I am telling you that just as with human children, the reward far exceeds the work.

If you’re on the fence about getting a dog, be bold, say YES, and prepare yourself for a wild (poopy) ride…just like you did when you decided to have kids. The only thing I don’t recommend is having a baby and a puppy at the same time. I know some people think, “Well, as long as I’m home with one…” Well, those people are crazy. I don’t know anything about the pros and cons of that kind of craziness, but I bet the cons are bad. Real bad. Unless you’re #TheoandBeau, in which case everything will be just fine. 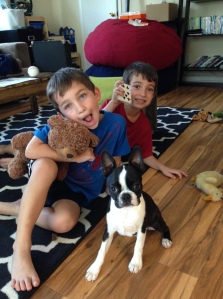 7 responses to “Making The Case For A Puppy (A List!)”